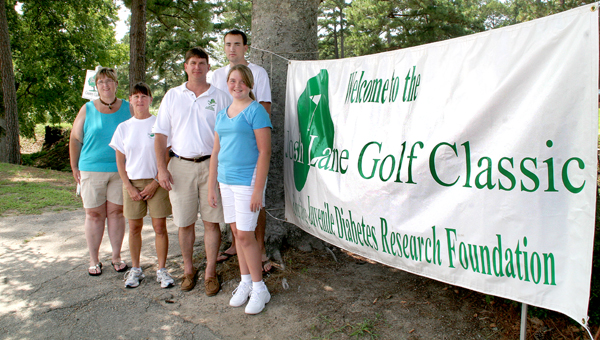 AHOSKIE – Imagine for a moment of being eight years old – an innocent age where a child is developing personality traits that will last a lifetime.

Now imagine being eight years old and confined to a hospital, battling cancer and diabetes….scared that life may end in the next minute.

That was the life of Kathryn Leggett, a Martin County youngster who beat the odds of an extremely rare form of cancer and now, at age 12, is ready to conquer the world.

Kathryn and her mother, Michelle, were the guests of the annual Josh Lane Golf Classic held Aug. 9 at Beechwood Country Club, an event that generates funds for the Juvenile Diabetes Research Foundation.

The youngster was diagnosed at age 8 with Histiocytic Sarcoma cancer. There have been only 60 documented cases worldwide in the last 10 years, the majority of which were with adults. She endured a very rough chemotherapy regimen with severe, life-threatening complications.

Additionally, due to chemo-induced pancreatic necrosis, Kathryn is now a Type I Juvenile Diabetic.

Her battle with cancer started in February of 2008 when she complained to her mother about a small bump on her arm.

“She came to me and said she had a little red bump on her arm and it was warm to the touch,” Michelle remembered. “The doctor thought it was an infected lymph node.”

Due to the fact that MRSA (Methicillin-resistant Staphylococcus aureus, which causes a red, swollen and painful area on the skin) was prevalent at that time, Kathryn was placed on antibiotics. However, the area grew in size; it eventually was lanced, but that effort failed to turn the tide.

“I eventually took her to my doctor; he used a long, sterile Q-Tip to test it and found it was tunneling underneath her skin,” Mrs. Leggett said. “He thought it to be a deep infection and recommended having a surgeon clean it out.”

“The doctor told us he didn’t know what it was, that was very concerning,” Mrs. Leggett said. “We were told to take Kathryn to Duke (University Medical Center).”

After seeing an Infectious Disease Specialist at Duke, Kathryn was immediately admitted to the hospital on April 2, 2008. Mrs. Leggett said the Duke radiologists were puzzled over what they had found. They sent the biopsies taken from Kathryn’s arm to the Mayo Clinic. In the meantime, Kathryn began a broader spectrum of antibiotics, which had no effect.

It took until late May of 2008 before anyone had a clue of what was going on within Kathryn’s little body…..a tumor in her shoulder about the size of a tennis ball which extended to her elbow. It was growing between the muscle and the bone.

“Once we found out what we were dealing with, our first question was who has treated Histiocytic Sarcoma cases before,” Mrs. Leggett remembered. “I went online and found a doctor in Philadelphia. We drove all the way there and he told us he had treated two kids with this same disease over the last 12 years and both of them died.”

Despite that grim news, the Pennsylvania doctor vowed to work with the family as well as the medical officials at Duke. In the meantime, John Hopkins University in Baltimore, Maryland provided some input; all in an effort to come up with a “recipe” for success.

“I was very special; I had all these doctors trying to help me,” Kathryn said.

“We drove home on the day before her ninth birthday; my husband, Randy, and I both thinking we were driving our only child home to die,” Mrs. Leggett recalled. “Randy and I were falling apart on the inside, but on the outside we were trying to keep our emotions together for Kathryn’s sake. We were trying to keep it happy for her.”

The family arrived home on June 10 (2008). Three days later, Kathryn was in the hospital at Duke receiving her first chemotherapy treatment.

That summer was a blur of activity, most of it bad. In July, she developed a case of blood poisoning, nearly leading to her death. That also led to two brain hemorrhages. Her fine motor skills deteriorated, causing her to lose the ability to walk.

On top of all those medical ailments, in August of that year Kathryn suffered pancreatic necrosis, due in part to one of the chemo drugs she was taking. That led her to lose approximately 80 percent of her pancreas, leaving only a fluid pocket where the rest of the organ used to be. Despite that fact, what was left of the pancreas was able to control her blood sugar well enough to the point where insulin injections were not necessary.

That good news took a turn towards the bad when Kathryn began her third round of chemo in September 2008. One of the daily oral drugs aggravated her blood sugar levels, sending them as high as 439 which led to her having to get up to eight shots a day of two different kinds of insulin.

“She was in severe, severe pain and was put into the Pediatric ICU at Duke,” Mrs. Leggett said. “Her kidneys begin to shut down, she was swollen, she turned cold; she was dying, but God brought her back.”

By the end of December 2008, Kathryn was not displaying many positive signs of recovery. PET scans were still showing active cancer in her shoulder/arm. Duke officials decided not to proceed with additional treatment. All of her records were transferred to John Hopkins University.

While mom and dad fretted over how much longer they would have their daughter alive, Kathryn was developing a fighter’s spirit. Failure was not among her options.

“All I knew was that there was something inside my body that wasn’t supposed to be there; I took the attitude of let’s do something about it and get it out,” Kathryn proclaimed.

In February of 2009 (three months removed from her last round of chemo), another PET scan was performed at Duke. The results revealed no traces of cancer. Ensuing scans (one every six months) have also been negative.

“God healed her the rest of the way,” Mrs. Leggett said. “She went from finding a bump on her arm in February of 2008 to a clear scan in February of 2009. At one point we were just thinking of how to keep Kathryn alive for just one more day. We were living minute to minute. We asked God to either heal her here on Earth or take her to Heaven and heal her there.

“I will not stop testifying of what God did for Kathryn,” the mom continued. “If there’s anyway we can help other children and their parents by what we’ve been through, we’ll do it.”

In January of this year, Kathryn was diagnosed with Type 1 Juvenile Diabetes. She has been on a steady diet of insulin injections since that time. The family is looking into having an insulin pump surgically installed.

“The shots are sometimes annoying,” Kathryn said. “I get cranky when my blood sugar gets too low and sleepy when it gets too high.”

Mrs. Leggett said diabetic research, supplemented by funding through events such as the Josh Lane Golf Classic, is making great strides in the development of an artificial pancreas. It can pump insulin automatically as needed by internally monitoring blood sugar levels.

“People not exposed to chronic illnesses are insulated from the day-to-day worries of individuals and families affected by these illnesses,” Mrs. Leggett said. “To be able to get up and not worry about taking a chemo treatment or having to constantly monitor your blood sugar is wonderful. Think about the daily pain and suffering of children having to go through cancer treatments or taking shots each and every day to control their blood sugar. I would urge everyone to take care of themselves, live a healthy lifestyle. Forget about having that second slice of cake; consider getting up a little earlier each morning and going out for a walk.”

That advice is not lost on young Kathryn.

“We’re trying to do things now at her early age so she can have a long and fruitful life,” Mrs. Leggett stressed.

Kathryn’s young friends are hip to what she’s experiencing.

“They’ll keep asking me about my blood sugar; have I checked it and what’s the number,” she said.

Due to her medical issues beginning back in 2008, Kathryn missed many months of school. When she was well enough to return to class, she was a bit apprehensive due to thinking of how her young peers would react to a bald-headed female classmate.

“Everyone was so supportive,” she recalled. “Even when I was still in a wheelchair they would fight over who got to push me. It was fun.

“Sometimes I stop and think why all of this happened to me,” Kathryn added. “At first I thought I had something that was normal in life and would quickly go away.”

As far as her future plans, Kathryn, now enrolled as a seventh grader at Washington Montessori Public Charter School,  said after all she’s been through she is considering a career in the medical field.

“I think I want to be a pharmacist,” she noted. “I love science and I already know a lot about medications and the affect they have on the human body.”

Kathryn Leggett should definitely understand by now how fragile life can be. She has endured more pain in her short 12 years on Earth than most will experience in a lifetime. She has gone from not knowing if the breath she was drawing at that particular moment would be her last to a young lady with her medical priorities in order and a new lease on life.

WINDSOR – Bertie High School has moved both its varsity and junior varsity football games due to the possibility of... read more