A blessing for Bella 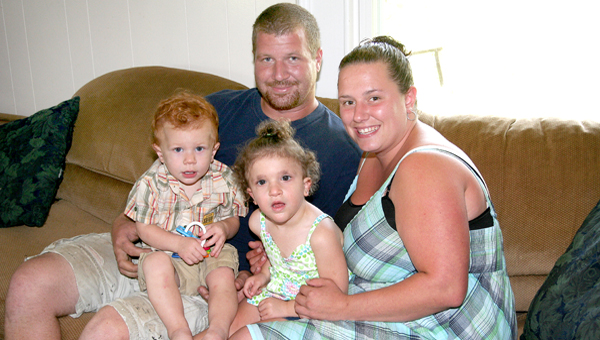 SEVERN — Bella Coren has a way of capturing people’s hearts.

There’s no secret formula in winning those hearts. The soon to be three year old is just her happy, outgoing self.

“Everyone who meets her just falls in love,” said Walt Osbon, Bella’s grandfather. “She just brings out the best in everybody.”

But now Bella’s community is rallying around the little girl known to incite so many smiles.

Bella, the daughter of Alisha Smith and Adam Coren of Severn, was recently diagnosed with Mowat-Wilson Syndrome, a rare genetic disorder.

On Friday, the Severn-Pendleton Ruritan Club is holding Bella’s Blessings Benefit Donation Lunch. The club will be serving pork loin plates for $7 each. The eat in or take out event will take place from 11 a.m. until 1 p.m. at the community center on NC 35 in Severn.

“We’re doing this benefit for the family to help with financial needs as it pertains to Bella,” said Rita McKeown with the Ruritan Club.

Another club member, Lori Burgess, is selling “Bella’s Bows,” pink and purple bows and wreaths, as a way to raise money as well.

Osbon said the Ruritan Club is “a wonderful group of people” and the town of Severn is living up to its motto of “Small town with a big heart.”

“That really rings true here,” he said. “They take up a lot of causes for people here in the community, families and others. It’s a very caring community. It’s awesome.”

Smith said her daughter was born with club feet, Hirschsprungs disease (a congenial bowel condition) and an open PDA (an open heart valve). Bella spent the first six months in the NICU at Children’s Hospital of the King’s Daughters in Norfolk, Va.

The little girl has endured seven surgeries to correct the various issues, most of which occurred within the first 16 months of her life.

Recently, after being referred to Duke Children’s Hospital in Durham, Bella was diagnosed with Mowat-Wilson Syndrome.

Intellectual disabilities, seizures and congenital heart disease are a few of the health issues facing those with Mowat-Wilson.

“On average people who have it don’t speak, there’s no language, no vocabulary,” Smith said. “They don’t hit their milestones like they’re supposed to, there are severe delays. …It will impact her whole life.”

Bella loves music, according to her family. On Wednesday, she danced gracefully around the living room of her family’s home, a pink scarf in hand. Her dance partner of the day was Carson, her 19-month-old brother.

She continued, “(Bella’s diagnosis) hasn’t changed our lives, it’s just prepared us. We know what her needs are now, all the therapies and services she needs.”

Carson, in his own right, has been a “big” little brother for Bella, who has learned a lot from her sibling.

Next month the family is returning to Duke to meet with augmentative communication specialists.

Smith said the proceeds from the fundraiser will help the family pay in part for those devices.

“(The funds are going to be going toward) a wide variety of things, her devices that are not going to be covered by insurance, different therapies, any need that arises for her,” she said.

In September, Bella will begin school at Central Elementary in Jackson in the Exceptional Children’s Program.

The family said they hope Bella’s story will shine the spotlight on those with similar disorders.

“We hope it will raise some awareness about Mowat-Wilson and the different genetic disorders,” Osbon said.

“We really cook a good meal,” she said.

Donations can also be sent through PayPal to: bellasblessings@live.com.

SEVERN — A Franklin, Virginia man is facing charges and more arrests are pending after an armed robbery here. According... read more