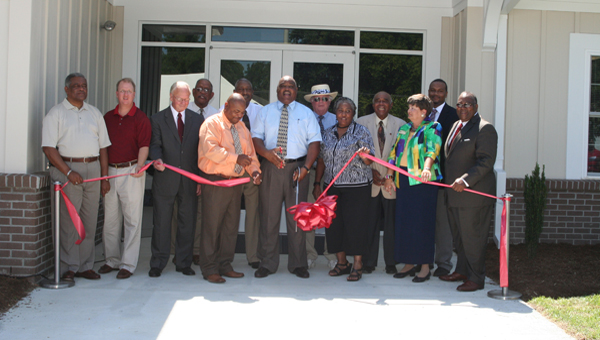 Several state and local officials join Seaboard Mayor Bobie Moss (center) as he cuts the ceremonial ribbon Wednesday at the new Municipal Complex. The facility, which houses the town hall and police department, was made possible by a USDA loan and grant obtained by the American Recovery and Reinvestment Act of 2009.

SEABOARD—Over the decades, Seaboard Town Hall has come a long way, literally from the back seat of a car to a modern facility.

The United States Department of Agriculture Rural Development, through the American Recovery and Reinvestment Act of 2009, provided a $452,500 community facility loan and a $125,000 grant to Seaboard for the project. The former town facility is over 60 years old with structural and space issues.

Additionally, a new fire station is being constructed next door to the new town facility. A $550,000 loan and a $135,000 grant, again from USDA Rural Development, were awarded to the Seaboard Volunteer Fire Department for that project.

The town put forth $50,000 for the two projects. Seaboard Mayor Bobie Moss said the town hall is a sign the community is making progress.

“We appreciate you coming out,” he said. “We’re certainly proud of the building that we have and everybody in town is certainly very proud of it as well.”

“There’s a lot going on in this town, you can see it too by looking around,” she said reciting her poem. “I see some rise, I see some fall, but never thought I’d see a new town hall.”

Broadnax said the back of the car contained the mayor’s office, tax department, police department and public works department.

“We have come a long way in the town of Seaboard,” he said.

Representatives from USDA Rural Development were present to offer congratulatory remarks and speak about funding provided for the project.

“If we were in baseball right now, Northampton County has begun to load the bases and we can see one of the runners just across the street” he said, referring to the new fire station. “So all I can say today is, let’s try to bring them home.”

Vital talked about the changes in the USDA Rural Development districts, as Northampton County was previously under the Area Six office. He thanked Area Six Director Doug Causey for the beginning work on the project.

“They pretty much provided the funding,” he said. “We just came on to close the game.”

State Sen. Ed Jones and Rep. Michael Wray also gave their thoughts on the facility. They presented Moss with a state flag.

“I think that when we come to these kinds of openings it shows that God has blessed us,” Jones said. “In these small towns we appreciate it more than in the large ones because when you have nothing and you get just a little bit more, you appreciate everything that you get.”

Wray said all the governing entities and the town working together are fundamental to projects like the new town hall.

“This is what life’s about, a small town community working hand in hand together,” he said.

Fires which have scorched more than 5,700 acres in the Great Dismal Swamp do not pose an immediate threat to... read more