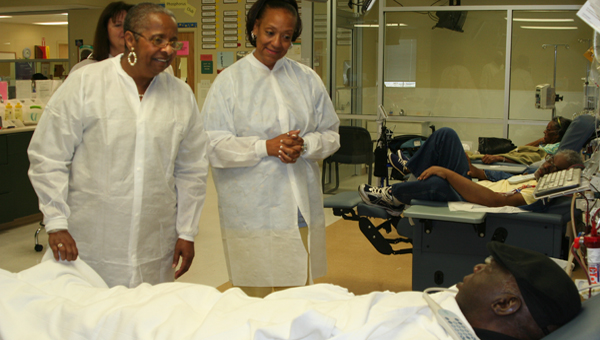 Recently, DaVita Ahoskie Dialysis shed some light on the serious health issue to one state lawmaker in recognition of Kidney Disease Awareness and Education Week, which takes place August 8-12.

DaVita staff and patients met with Rep. Annie Mobley on Monday to educate her on kidney disease as well as dialysis, a vital treatment many of those living with chronic kidney disease (CKD) and end stage renal disease (ESRD) rely on to live. Mobley also toured the facility and met with patients.

“When I heard about Kidney Disease Awareness and Education Week I thought, this is great, let’s get our lawmakers in to educate them on what dialysis is all about and let the patients share their experience so you all can see what they go through,” said Gracie Alston, facility administrator at DaVita Ahoskie.

DaVita, which is Italian for “giving life,” cares for 89 patients in the Hertford County area. Out of 1,700 DaVita clinics, it is number 13 in the United States for clinical outcome and care. The Ahoskie clinic is also number one in the state.

At DaVita, Alston works with her treatment team, including dietician Rosemary Robertson and social worker Dana Capps, to care for the center’s patients in various capacities.

“Many people are affected by it, especially the African-American population with higher rates of diabetes and high blood pressure. Those are two major reasons people end up with kidney disease,” Alston said. “And, with people living longer now and poor diets and all that, people’s kidneys are failing in record numbers.”

According to information provided by DaVita, 70 percent of new cases of kidney failure are caused by diabetes and high blood pressure.

While many strides have been made in identifying and treating kidney disease, it continues to afflict a growing number of individuals in minority communities. Thirty-three percent of all kidney failure patients are African-American.

Alston said there are not many resources to help dialysis patients.

“Resources are very limited because the needs of the dialysis patients are humongous in all areas,” she said.

Ronnie Demary, Deborah Howard and Carlton Gaskins are patients at DaVita that come on a regular basis for dialysis, which removes waste and excess fluid from the blood stream when the kidneys are unable to do it on their own. Treatments are a lengthy process and can take up to three to five hours to complete and patients typically visit the center three times a week.

Demary, who was diagnosed with hypertension in 1999, began dialysis treatments in 2005 soon after two lumps were discovered in one of his kidneys and it had to be removed.

“After it came out, I was safe to go back to work, but I was tired all the time,” he said. “When I went back to Greenville, that’s when they told me I had to go on dialysis.”

Despite dialysis recommendation from his doctor, Demary was still headstrong about seeking kidney treatment. But after several days, Demary was feeling weak, a direct effect from his failing kidney.

Demary said it has taken a lot of time to adjust to the changes in his life due to his condition.

“I’m used to making big money, then you get what you get on disability, and it’s nothing really,” he said. “Your whole life changes and I had to adjust.”

Capps said many patients struggle with those life alterations due to kidney disease.

“The psychosocial issues related to this illness are tremendous,” she said. “Many of our patients face depression, changes in financial status, needing to get their medication—it’s a lot to adjust to.”

Six years ago, Howard began dialysis treatment and had a choice of taking her treatments at home or having them at DaVita. Howard’s regular visits to a nephrologist caught her disease early and her doctor ordered her to begin dialysis.

“I decided that I didn’t want to act right and do my dialysis at home because I am a sociable person,” she said. “I’ve got to have somebody to talk to me.”

Howard often receives comments on how she doesn’t “look” like a dialysis patient. A federal employee for many years, she worked for three years while in treatment and she even travelled.

“The problem with that is the Medicare reimbursement rate is maybe a one-fifth or one-fourth depending on the private insurance,” Alston said.

Capps said 90 percent of the patients at the center are on Medicare, and some have supplemental insurance (such as BlueCross BlueShield). Some do not have secondary insurance and 20-30 percent of the costs are not covered.

“What Medicare does is basically cover the minimum expenses,” she said.

In 2007, Gaskins, a disabled veteran, began dialysis treatment after cancerous tumors were removed from both of his kidneys.

Gaskins also struggled with the drastic changes of living without his kidneys, including treatments which last up to five hours.

“You have to be a strong-minded person to handle this,” he said. “What I’m dealing with, really, I don’t wish it on anybody. It’s a fight every day.”

Historic building to be repaired

WINDSOR – This historic town is doing even more to preserve itsolden times. The Windsor Board of Commissioners voted unanimously... read more