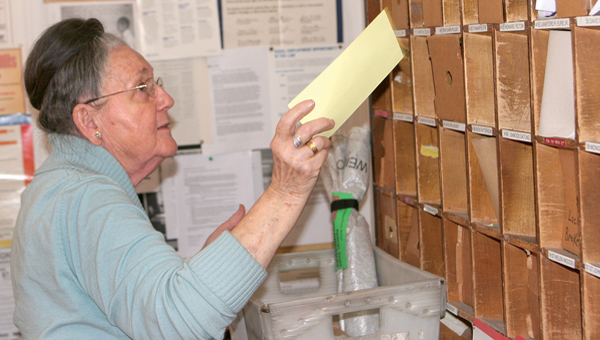 Roduco Postmaster Betty Davis inserts a letter into one of the rented boxes located inside the tiny Gates County facility. A current study by the United States Postal Service has the Roduco Post Office as well as two other local facilities – Pendleton and Severn in Northampton County – on a possible closure list. File Photo by Thadd White

RODUCO – Despite working at one of the state’s smallest post offices, Betty Davis takes pride in providing a needed service to the residents and those traveling through this tiny Gates County community.

If a plan currently under study by the United States Postal Service (USPS) is approved, Davis will either be transferred or opt for an early retirement.

As more customers choose to conduct their postal business online, on their smart phones and at their favorite shopping destinations, the need for the USPS to maintain its nearly 32,000 retail offices — the largest retail network in the country — diminishes. To that end, USPS officials announced last week they will be taking the next step in right-sizing its expansive retail network by conducting studies of approximately 3,700 retail offices to determine customer needs.

The 20 post offices in North Carolina currently under study for possible closure include three in the Roanoke-Chowan area – Roduco, where Davis has worked since October of 1991, Pendleton and Severn.

Additionally, USPS will the Potecasi Post Office effective Dec. 31 as well as limiting the services earlier this year offered at the Conway Post Office.

“Today, more than 35 percent of the Postal Service’s retail revenue comes from expanded access locations such as grocery stores, drug stores, office supply stores, retail chains, self-service kiosks, ATMs and usps.com, open 24/7,” said Postmaster General Patrick Donahoe. “Our customer’s habits have made it clear that they no longer require a physical post office to conduct most of their postal business.”

On the other hand, Davis is a strong believer in hands-on customer service.

“A lot of people bring mail to the box because they feel safer dropping it in the box than having it in their mail box,” she said in an interview conducted earlier this year. “Most of the people that come in aren’t regular customers, they are folks that just drop by.

“I provide a service and people seem to appreciate it,” she added. “I have time to help them and they tell me that’s important. It’s good to feel like people appreciate what I do.”

For communities currently without a postal retail office and for communities affected by these retail optimization efforts, USPS is introducing the Village Post Office as a potential replacement option. Village Post Offices would be operated by local businesses, such as pharmacies, grocery stores and other appropriate retailers, and would offer popular postal products and services such as stamps and flat-rate packaging.

“By working with third-party retailers, we’re creating easier, more convenient access to our products and services when and where our customers want them,” Donahoe said. “The Village Post Office will offer another way for us to meet our customers’ needs.”

With 32,000 postal retail offices and more than 70,000 third-party retailers — Approved Postal Providers — selling postage stamps and providing expanded access to other postal products and services, customers today have about 100,000 locations across the nation where they can do business with the Postal Service.

“The Postal Service of the future will be smaller, leaner and more competitive and it will continue to drive commerce, serve communities and deliver value,” Donahoe added.

However, small communities such as Roduco, Potecasi and Pendleton do not have retail outlets to join the ranks of a Village Post Office.