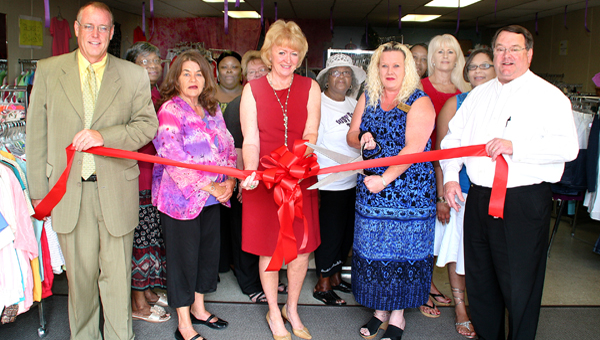 AHOSKIE – Since its inception more than two decades ago, Roanoke-Chowan S.A.F.E. has been the beneficiary of financial and volunteer assistance.

While those elements remain a staple of the organization which offers services for abused families with emergencies, S.A.F.E. has added a “self-help” way to cover its operational expenses.

Roanoke-Chowan S.A.F.E. has opened a thrift store at 111 North Railroad Street in downtown Ahoskie. Funds generated from the sale of merchandise – comprised of women’s clothing and accessories – will be used to operate its emergency shelter.

Tammie Carter, Executive Director for S.A.F.E., said the opening of the thrift store couldn’t have come at a more opportune time.

“Due to the cuts in the state budget, our dream was to help fill that void by opening and maintaining a store that was community supported and able to generate funds for our programs,” Carter said.

“The store will serve a multi purpose function – an outreach to women who may need services; an outlet for shoppers to make purchases at great savings; and having the involvement of the communities we serve,” Carter added.

Donations in the form of women’s clothing and accessories, as well as cash donations, are tax deductable due to S.A.F.E.’s non-profit status.

“My staff and I would like to invite any special people who may have some free time and wish to volunteer in making ‘Just for You’ a success to please call us at (252) 332-1933.”

The grand opening of “Just for You” was conducted Wednesday morning. There, Ahoskie Mayor Linda Blackburn was joined by Ahoskie Chamber of Commerce officials Dan Joyner, James Eure and Jerry Castelloe as they wished Roanoke-Chowan S.A.F.E. good luck in their new endeavor and pledged their support in helping the thrift store succeed.

POTECASI — A routine call to break up a fight turned dangerous for Northampton County law enforcement officers at a... read more