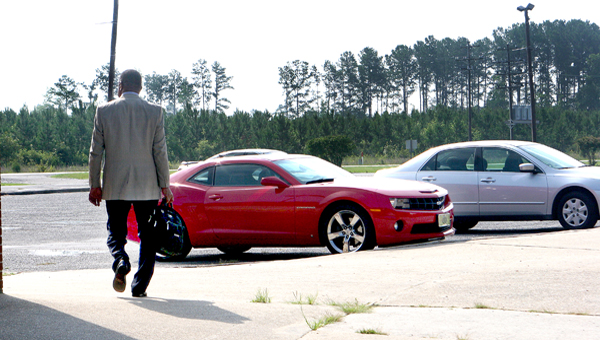 Glenwood Mitchell walks to his car at Bertie High School for one of the final times prior to his retirement. Staff Photo by Thadd White

WINDSOR – A great career finished with a storybook ending.

Glenwood F. Mitchell officially retired from Bertie County Schools on June 30 of this year, just days after he accepted the Innovator Award from the North Carolina New Schools Project on behalf of Bertie STEM High School.

“It feels good,” he said. “I couldn’t have written a better ending to my professional story.”

Mitchell emerged from retirement almost a decade ago to help the school district with a pair of special projects. Upon his decision to retire again four years ago, he was asked to help with the opening of Bertie STEM and agreed.

After a year and a half at STEM, he was named Principal of Bertie High School as well and has led both schools for just over two years. He said the success of the two schools was just as important as being recognized by the New Schools Project.

“The ending for both schools is exactly what I would have hoped,” he said. “Where we are in terms of End of Course testing, Adequate Yearly Progress and the growth of the schools is incredible.

“In the past few days I’ve been packing my boxes and I’ve seen test scores from when we first got here where they were 14, 18 or maybe 50 percent proficient,” he said. “To see where the schools have come since then has been amazing.”

While proud of the changes in test scores, Mitchell said he is equally estatic of other strides made at Bertie STEM and Bertie High.

“I feel equally as good about the change in the culture of the school over the last two years,” he stressed. “Students have higher expectations of themselves. To have students come to me who have made a three or four on their EOC fills my heart with joy.”

He said the students weren’t the only ones who have changed their expectations.

The principal said he was proud of the number of teachers in the two schools that have established “an environment of powerful teaching and learning.”

As testimony to the change in culture, Mitchell pointed to the fact that both students and teachers were staying after school and coming to the building on weekends to make sure they were prepared for classes.

Despite having led one of Bertie High School’s most successful years in 1995, Mitchell said his leadership style changed when he came out of retirement to accept the Bertie High and Bertie STEM administrative jobs.

“I’m old-school about a lot of things, but leadership is no longer one of them,” he said. “The principalship has changed since I was here before.

“When I was here before, the principal was more authoritative and teaching was about lecturing and straight rows. It was more about a text book, pencil, paper and chalk.”

He said that is no longer the case.

“Leadership in school now is more about a team approach where the principal is the leader of the team, but teachers are members and have a lot more to do with decision-making,” Mitchell said. “The classroom also looks and sounds a lot differently. Students are actively engaged in projects and there is much more movement in the classroom.”

He said that was a difficult adjustment when he first returned to school.

“It was a difficult thing to adjust to because I came from the old school,” Mitchell said. “The thing that helped me most was training from the North Carolina New Schools Project.”

He said another way he was persuaded to change style was because of his grandson.

“Having spent time with him from birth to school age, I realized he wasn’t going to learn the way I learned,” Mitchell stated. “He knew more about technology when he started school than I did at 50. That encouraged me to learn all I could about doing business differently.”

Mitchell said younger teachers who came in from the first day looking for technology to use in their classrooms showed him how it could be used to help students.

“In the four years since my return I’ve probably learned as much as ever about education,” he said. “My students and teachers have taught me and, hopefully, I’ve taught them something about the business of education.”

Mitchell said he had enjoyed his four years back in the role of principal, but felt it was time to leave.

“I graduated,” he joked. “Four years of high school and you get to graduate. We teach students to be ready for college, the military or a career after four years. I’ve added one more – retirement.”

He said he was excited about the information coming down from his last year at BHS and Bertie STEM.

“The good thing about my graduation is the preliminary data indicates I may be the valedictorian or salutatorian,” he mused.

Looking forward to the coming days, Mitchell said he wouldn’t be filling his schedule.

“I’m going to get up and walk every morning and then go to Ella’s Café and get breakfast,” he said. “After that, I’m going to go back home and work in the yard and in the house. I don’t have any big plans.”

He said he will also spend time with his grandson and may even accept a job sometime next year in education.

“I am not excited,” he said. “I’m not very emotional about anything. I learned that in the school business you have to be objective and that eliminates a lot of emotions.

“Some people look forward to retirement because they get to do all the things they really want to,” he said. “For the last four years, I’ve done what I wanted to do every day so I don’t have to look forward to something.

“I’m not planning a cruise because I have been on one for four years,” he added. “The end is the best landing you could ask for.”