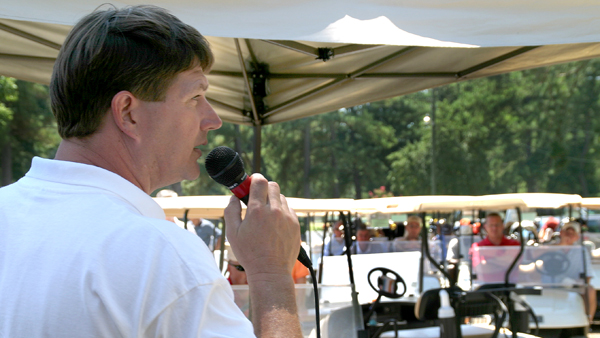 AHOSKIE – A decade has come and gone since David Lane decided to stage a golf tournament to help his son as well as millions of other children.

While he waits for a cure for juvenile diabetes, Lane continues his effort.

The 2011 Josh Lane Golf Classic is staged for Tuesday, Aug. 9 at Beechwood Country Club. As is tradition, it’s the largest, single-day golfing event in the Roanoke-Chowan area and a few spots remain in this year’s field.

Those wanting to participate can get their foursome in if they act immediately. The cost per foursome is $350 and includes 18 holes of golf, carts, two mulligans per player, a golfer gift and a luncheon.

Individual golfers can register for $100 per person.

Call David Lane at 252-398-5956 or contact the Juvenile Diabetes Research Foundation at 919-847-2630. Registration can also be handled online at www.joshlanegolfclassic.com.

One hundred percent of the proceeds benefit JDRF.

Golfers also qualify for special prizes, including a $10,000 putting contest (50 percent to the golfer; 50 percent to JDRF), straightest drive and guess the tees. There is also a raffle featuring numerous prizes.

Those who do not play golf, but would like to be involved in the tournament, can sponsor a hole or tee box for $250 each. Contact either of the aforementioned telephone numbers if interested.

A Family Sponsorship Board will be on the premises. Those wishing to post their family name in sponsorship of the tournament can do so for $50.

Since its inception in 2000, the Josh Lane Golf Classic has raised more than $325,000 for JDRF, the leading charitable funder and advocate of type 1 diabetes research worldwide. Since 1970, JDRF has awarded more than $680 million to diabetes research. More than 80 percent of JDRF’s expenditures directly support research and research-related education. With your dedication, a cure can become reality.

Filing for municipal offices has ended in the Roanoke-Chowan region. Despite that fact, there will be a number of blank... read more