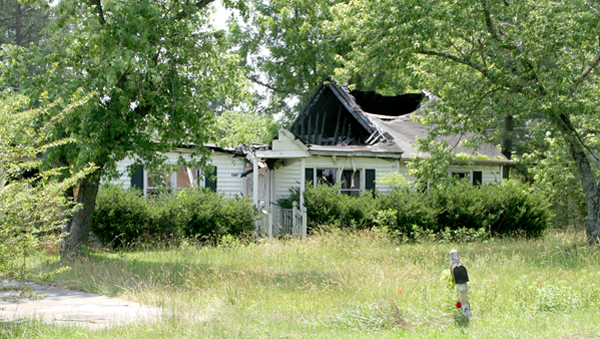 This home, destroyed years ago by fire, along US 13/158 in the Corner High community of Gates County will now fall under the county’s newly approved condemnation ordinance. Staff Photo by Cal Bryant

Over the past several months, the Gates County Board of Commissioners have weighed the pros and cons of a proposed condemnation ordinance for unoccupied structures that pose a safety or health hazard.

After several rounds of changes to the document, the board presented a final version of the ordinance for public debate at their July 6 meeting prior to passing final judgment on the measure.

“Before we go into public comment, I still maintain my earlier position on this ordinance, I’m not happy with allowing anonymous complaints,” said Board Chairman Graham Twine. “I would like to see that part removed, but I feel the other board members are not interested in doing that.”

“Graham, I think it’s important to acknowledge that the complaint has been acted upon,” Commissioner Johnny Hora stated. “I’m like you, I don’t want to take any action before someone steps up to the plate and says take care of this. When the second call comes in I want us to respond that the Fire Marshall has been out and recognized there is a problem. At that time I would like to see a formal complaint filed.”

Upon opening the public hearing, John Rissmiller of Eure inquired about old buildings once used or still in use for agricultural purposes.

“I’ve got some farm buildings on my property that are old,” Rissmiller said.

Twine pointed out that the ordinance addresses those types of structures, saying that barns, shelters, lean-to’s, sheds, etc. utilized for agricultural purposes are not applicable to the ordinance.

Commissioner Henry Jordan made the motion to accept the ordinance. Commissioner Jack Owens offered a second. The measure was approved by a 4-1 vote, with Twine offering the opposition based on his opinion that anonymous complaints should not be allowed.

The board studied several drafts of the ordinance since it was initially presented on May 4 by Planning Director Morgan Jethro, Emergency Management Director Billy Winn and Director of Inspections Edgar Mitchell.

As noted in the ordinance, the county’s Building Inspector, in consultation with the Gates County Fire Marshal, shall condemn structures as unsafe based on state statute 153A-366 (“The inspector shall condemn as unsafe each building that appears to him to be especially dangerous to life because of its liability to fire, bad conditions of walls, overloaded floors, defective construction, decay, unsafe wiring or heating system, inadequate means of egress, or other causes; and he shall affix a notice of the dangerous character of the building to a conspicuous place on its exterior wall.”)

The property owner will be notified by certified mail, advising them of a hearing on the matter. If the property owner cannot be located after due diligence, a notice of the hearing will be published in a newspaper of general circulation in the county.

Following the hearing, the Building Inspector may issue an order to repair, close, vacate or demolish the building. Upon learning of that order, the property owner has 60 days to remedy the defective conditions. If there is imminent danger to life or other property, it will be at the discretion of the Building Inspector to prescribe corrective action to be taken in less than 60 days. Failure to comply with the 60-day grace period will result in condemnation and demolition by Gates County officials. The cost of removal or demolition will become a lien against the real property.

The Gates County Board of Commissioners will serve in the capacity as the final authority and appellate board for the condemnation/demolition process. Once the property owner has received the condemnation order, they can file a written notice to appeal the decision within 10 days of the order being issued.

The ordinance, which is immediately effective, does not address occupied dwellings.

RALEIGH – The ink was not yet dry on North Carolina’s congressional redistricting map before state lawmakers were back to... read more