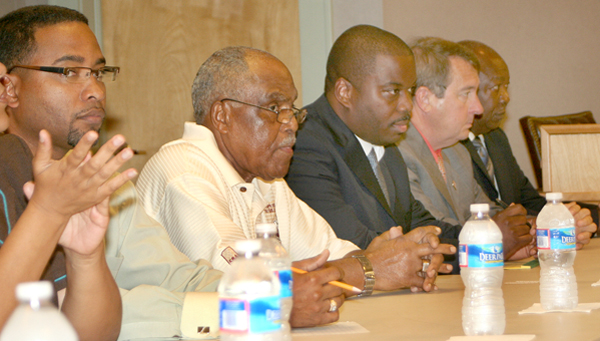 Members of the Northampton County Board of Education and administrative staff listen as Judge James D. Llewellyn sets the ground rules for Thursday’s mediation session in Jackson. Staff Photo by Amanda VanDerBroek

According to the 2011-12 Budget Agreement, provided to the media by Judge James D. Llewellyn, who served as mediator, the commissioners, upon written request from the Board of Education, will authorize an immediate transfer of $200,000 from the school system’s approved fiscal year 2011-12 capital outlay budget to the current expense fund.

Meanwhile, the transfer leaves $145,000 in the capital outlay budget, money set aside for use for building and grounds improvement projects for the schools. There was $345,000 available in that account for the 2011-12 budget year.

But there was more to Thursday’s agreement than a transfer of capital outlay funds.

The agreement also states that the two boards agree to hold at least three joint meetings during this fiscal year with the dates and times being the second Mondays in August, December and April, all beginning at 5:30 p.m. It was noted that the August and April meetings were to take place in the commissioners’ room while the December meeting to take place at the Board of Education’s facility.

The agreement was the result of nearly two and a half hours of closed door mediation between the two governing entities, their respective legal representation and Judge Llewellyn.

“Once I sign that agreement you guys have to operate under the rules of that agreement for at least the next calendar year until budget time comes. I hope we can resolve in such a fashion that we don’t have to do this again,” he said. “It’s spending your time and the county’s money when both of you, in my opinion, more than likely, have the good of the county at your heart and on your minds.”

Judge Llewellyn directed the two boards to convene their governing entities and then go into two separate closed sessions. The Board of Education met in their closed session in the small courtroom at the back of the building while the commissioners met in their board room.

“When you’re in a private session the open meetings law does not apply,” said Llewellyn. “That is when things are said in an effort to get matters settled.”

Judge Llewellyn noted the benefit of a settled agreement.

“Once I sign this agreement I want you to know that this perspective lawsuit that hangs over our heads like a big dark cloud will be gone,” he said. “And that’s what you all should be striving to do.”

In the end, the two boards along with Llewellyn seemed pleased with the agreement as they reconvened in open session.

“I would commend both boards for bending without breaking,” said Judge Llewellyn. “You’ve saved the taxpayers of this good county a great deal of money; you saved yourselves a great deal of anguish, uncertainty and anxiety.”

“We need to keep this open line of communication,” he said.

Greene said the Board of Commissioners appreciated the comments.

“We look forward with working and meeting with you as set out (in the agreement) and more if needed,” she said.

“I’m going to be the first one to admit that the only thing that I did was build the fence and they kept the ball going in between,” said Llewellyn.

After the meeting, County Manager Wayne Jenkins said the agreement was an example of the strong leadership in the county.

“We look forward to working through and completing the terms of the agreement,” he said. “And the action today on behalf of both boards was in the best interest of the taxpayers of this county and in continuing to protect education.”

MURFREESBORO — Vendors who come for the Watermelon Festival will now need a permit to conduct their business within town... read more