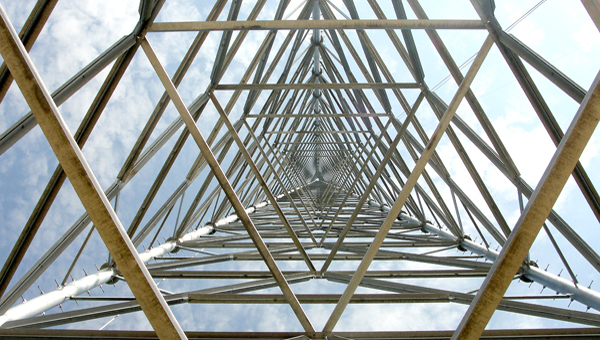 MILWAUKEE – No it’s not a reptile, but rather VIPER (Voice Interoperability Plan for Emergency Responders).  The NCHSP (North Carolina State Highway Patrol) is the primary caretaker of this huge statewide project.

The 240 tower network, strategically placed across North Carolina, provide the foundation for intrastate communications by connecting the towers with microwave paths, according to NCSHP First Sgt. Taylor. He said each tower provides a potential 30 radial mile, 800 MHz communication range.

Currently, 171 towers are operational statewide. Five of those are in the local area – one each in Gatesville, Ahoskie and near Odom Prison in Northampton County – and two in Halifax County (Halifax and Brinkleyville).

One of the newest towers is currently under construction near Milwaukee in Northampton County at the old Georgia-Pacific mill. This site is located along Buck Boone Road adjacent to the railroad track.

The foundation of this 480-foot model WSSTP tower rests on three huge six-foot diameter footings. According to Dennis Martin, a local resident, digging the deep holes with an auger, lowering the interlocking rebar and pouring the concrete was an impressive feat in and by itself.

The footings were placed 40-feet apart.  The tower was assembled vertically in 23 sections or tiers, each 20 feet in length. A crane performed that task, taking the tower to 160-feet. The remaining portion of the tower was erected using an 80-foot “gym pole” and winch. The final three, 20-foot sections were assembled on the ground and lifted to their final resting place.

The top 60-feet of the tower contains mounts for communications devices.

Each of the first three columns are secured using eight, one and one-half inch diameter embedded anchor bolts and angled to join 480-feet later.  These columns are secured to each other horizontally and vertically using 4-by-4 angle braces with some doubled to increase structural strength.

The tower is constructed triangularly. The equilateral triangle is the strongest of the geometric configurations.

To give you an idea of the height of the tower, imagine walking the 360-foot length (endline to endline) of a regulation football field and back to the 30 yardline and you have covered 480 feet.

The construction process, which took three weeks, was observed by many Milwaukee residents, including Martin who watched the effort daily, both onsite as well as with a pair of binoculars from Martin’s Mini-Mart located on NC 35.

AHOSKIE – J.T. Thompson loves the game of basketball. He also possesses the skills to play the game at a... read more