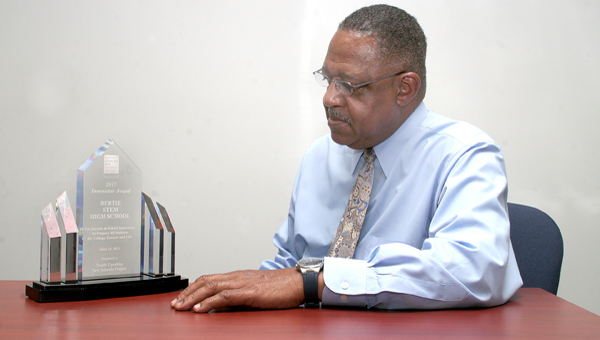 WINDSOR – Bertie STEM continues to be a trend-setter for education in North Carolina.

Thursday afternoon the school, one of North Carolina’s pioneering secondary schools with a focus on science, technology, engineering and math, was honored with the Innovator Award. That special presentation is given annually by the North Carolina New Schools Project (NCNSP) to a pace-setting high school within its network that is demonstrating strong results in preparing students for college, careers and life.

Bertie STEM recently held commencement exercises for the first 58 students to graduate from the school. Principal Glenwood Mitchell has been with the school since it opened in the fall of 2007 and was credited for his leadership.

“Through the strong leadership from Principal Glenwood Mitchell and strong support from the Bertie school district’s central office, the school has established an academic culture where rigorous instruction is now the norm and high performance an expectation for all students,” said NCNSP President Tony Habit.

“Bertie STEM has created a culture in which all students understand that their education doesn’t end with a high school diploma,” he added. “The faculty and staff at the school have taught students to believe in themselves because they believe in them. They don’t accept excuses.”

Mitchell said that culture didn’t just happen, but was the result of four years of hard work by staff and students.

“I’ve always believed it takes three to five years to make a difference in a school,” he said. “It continue to prove itself. This is the end of four years and we’re just getting to this point.

“In order to change a culture, it takes three to five years; it’s a process, not something that happens overnight,” he added. “You have to change the way students think, the way teachers think, the way custodians think, it has to permeate the school.”

Mitchell said he believed having the same leadership in place during that four years was also important.

“It also proves another point that the leadership has to stay the same in that three to five year period,” he insisted. “By staying here for four years, we’ve been able to see this happen. If someone stays one year and then someone else comes in, it is hard to make a change. You need continuity in leadership.”

In the four years since Bertie STEM opened its doors, the school has helped raise expectations not only for its students but for all high school students in the county with a model that helps all succeed.

The pioneering school this year graduated 94 percent of the freshmen who started four years ago as the inaugural class. More than half of them have been accepted by and plan to attend a four-year college or university.

Bertie STEM was one of four finalists for the award. The other three were The Early/Middle College at Bennett in Guilford County, City of Medicine Academy in Durham and the Greene Early College High School in Greene County.

“All of these schools have had few, if any dropouts,” Habit said. “Those with graduating classes have graduated nearly all of the ninth graders who began with them four or five years ago.”

Mitchell said he was honored to have Bertie STEM chosen for the award.

“We’re excited about it,” he said. “It is always good when we get recognition in northeastern North Carolina for the hard work teachers and students do.

“When it was announced, I was almost in disbelief,” Mitchell added. “You don’t believe Bertie County can be recognized statewide and you have to let it sink in.”

Mitchell said he was proud of the culture change STEM had produced.

“It has changed the culture of the high school by 100 percent- just leaps and bounds in terms of what students can do; the ability of students to be successful in educational programs and End of Course tests,” Mitchell said.

“There was a belief by teachers that students couldn’t be successful and it is being shown that they can,” he insisted. “Test scores were low and it was accepted because people said the students of Bertie County couldn’t do it.

“Now, not just in STEM, but in Bertie High School, students are showing the state and nation they can be successful on standardized tests,” he added.

Mitchell was joined at the ceremony by teachers Kezia Lewis-Lee and Lynn Woodard as well as Counselor Sharon Tann and Maxine Ray, the STEM office assistant. Lewis-Lee, Tann, Ray and teacher Jennifer Veverka  were all with Mitchell when the school began four years ago.

With an overall passing rate of 88 percent last year on state exams, Bertie STEM had already earned the title of “School of Distinction” in 2010 from the State Board of Education. The school went one better this year, earning a combined passing rate on all tests of 92 percent, which puts it on track to be a “School of Excellence” when the state board announces the ABCs accountability results later this summer or early in the fall.

In Algebra I this year, not one of the 41 students who took the test failed it; 60 percent earned a score of 4 on the 4-point scale. Of the seven subjects at Bertie STEM, which included state exams, five of them had passing rates above or just under 90 percent.

“Those are the kind of results that any high school in North Carolina would be proud to claim,” Habit said. “At Bertie STEM, where more than two thirds of the students are from low-income families, those results are proof that high expectations, powerful teaching and learning and strong leadership make all the difference.”

WINDSOR – Filing for most municipalities in Bertie County will begin Friday, July 1. Those wishing to seek municipal office... read more