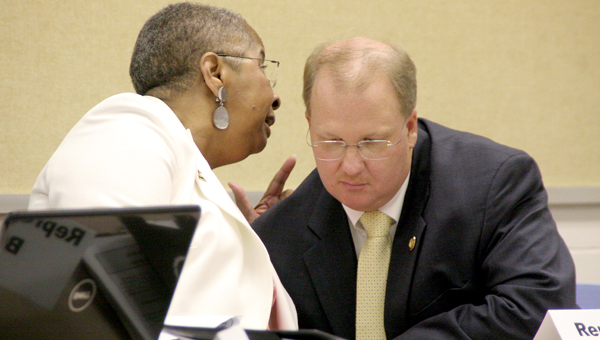 AHOSKIE – Controlled frustration summed up the feelings of many here Thursday.

From claims of gerrymandering to distinct one-liners such as “strategy of segregation instead of fair representation,” the majority of the speakers at public hearings across the state did not favor the proposed NC House and NC Senate redistricting plans as released late last week.

Roanoke-Chowan Community College was one of seven statewide sites where public hearings were conducted. All were linked in a video conference format, one moderated from Raleigh by Senate Redistricting Chairman Bob Rucho, a Mecklenburg County Republican.

Other than Ahoskie and Raleigh, public hearing sites were located in Fayetteville, Charlotte, Greensboro, Greenville and Wilmington.

Rep. David Lewis, (R-Hartnett County), the NC House Redistricting Committee Chairman, served as moderator at the Ahoskie site. Also seated at the head table were Representatives Annie Mobley of Ahoskie, Michael Wray of Gaston and Angela Bryant of Rocky Mount along with NC Senator Ed Jones of Enfield, all Democrats.

The proposed new lines for the House and Senate districts currently show only those areas of the state that fall under the Voting Rights Act (VRA, otherwise known as districts where minority races comprise the majority of the population). The lack of a complete state map drew negative responses from many of the speakers at RCCC.

“The maps released show only a small portion of the state’s districts,” said Carl White, President of the Hertford County Chapter of the NAACP. “These plans are not sufficiently developed to warrant a comprehensive and studied response. Our interests in fair representation are not limited to designated majority-minority districts. At this point, it is impossible for us, or the general public, to say whether these districts will help or hurt minority voters until we see the entire district plans.

“We are looking for a fair and transparent redistricting process that allows for meaningful public participation,” White continued. “We look to the leadership to release completed maps and allow appropriate time for analysis and public input so a true dialogue on redistricting can occur.”

White stressed the importance of achieving fair representation for all and consideration of traditional redistricting principles such as compactness and respecting communities of interest.

“We are very concerned that these proposed districts are being developed in a manner that have the intent, purpose and effect of segregating minority voters in non-cohesive and competing communities of interest,” he said. “The plans indicate that there are attempts underway to illegally pack and stack minorities into a few “set-aside” districts which will weaken the minority voice and political influence across the state.”

White added that the proposed districts are not being developed in appropriate compliance with the Voting Rights Act. That same sentiment was expressed by others, white and black, across the state who believe the redistricting plans will lead to lawsuits.

Anthony Clark, Chair of the Northampton County Democratic Party, stressed the need for fair representation for all people of his county.

In response to only the VRA District maps being released, Senator Rucho responded by saying it was required by law to release those maps first. The current maps only reveal 22 percent of the state’s 170 House and Senate districts.

“We’re here to listen and learn from your comments and ideas,” Sen. Rucho said. “We can adjust these maps accordingly based on the comments and concerns we hear today and then move on to the next phase.”

Many of the Ahoskie speakers, 14 in number, supported Rep. Bryant, whose current two-county District (Halifax and Nash) would be realigned to exclude her Rocky Mount residence.

“We’ve already elected the candidate of our choice; Angela Bryant is capable is making good, honest decisions that affect Halifax and Nash counties,” said David Harvey, President of the Halifax County NAACP. “We share the same issues between those two counties and we elected Representative Bryant to address those issues. We ask you reconsider changing District 7; we believe it works just fine the way it is now.”

Others were concerned about the “finger” counties of northeastern North Carolina (Chowan, Perquimans, Pasquotank, Camden and Currituck). The latter concern was expressed by Perquimans County Republican Party chairman Diane Layden of Hertford and former Elizabeth City Councilman Bill Lehmann. They asked for those counties to remain together in the House, Senate and Congressional districts since they share the same regional approach to business, educational and medical opportunities as well as regulatory concerns and coastal issues.

“Grouping the finger counties together will provide better representation for all the citizens, which should be the ultimate goal of any governmental process,” Layden said.

Gates County native Earl Rountree said he had devised a House District of his own.

“You always want to see redistricting done in a way that will benefit the most people,” Rountree said. “I’ve proposed a (House) district of Gates, Pasquotank, Perquimans and Chowan which is exactly  80,000 people. It doesn’t have anything to do with Mrs. Mobley; it’s just that these counties share a lot of things.”

The newly designed district lines impact the Roanoke-Chowan area. NC House District 5 – currently represented by Mobley and consists of Bertie, Hertford, Gates and Perquimans counties – would become District 2, comprised of Bertie, Hertford, Gates and a portion of Pasquotank County. District 2 has a combined population of 82,099 (54.48% black and 41.53% white). The District is also heavily Democratic with 70.17 percent registered to that party. Unaffiliated voters comprise 16.10 percent of the District while Republicans make up 13.62 percent.

Wray, currently representing House District 27 (Northampton, Warren and Vance), would lose Warren and Vance under the proposal and gain Halifax County to form District 7. That new two-county District boasts a population of 76,790 of which 54.70 percent are black and 39.79 percent are white. District 7 would be another Democratic stronghold where 74.52 percent are registered to that party. Unaffiliated voters and Republicans respectively comprise 13.57 and 11.84 percent of the population.

The redistricting proposal on the Senate side would see Jones lose the R-C area. He currently represents District 4 – Bertie, Chowan, Gates, Halifax, Hertford, Northampton and Perquimans. District 4 under the new proposal would encompass all of Halifax County and portions of Nash and Wilson counties (combined population of 190,988 with 53.78% black and 38.95% white; and dominated by the Democrats with 70.19% registered to that political party).

The plan creates a new Senate District 3 – Northampton, Edgecombe, Hertford, Bertie, Martin, Chowan, Washington and Tyrrell counties. The total population of that eight-county District is 181,535 (53.74% black and 42.72% white). Democrats dominate the proposed District (73.81%). Republicans comprise 13.94 percent of the registered voters while 12.20 percent are listed as Unaffiliated.

Gates County is not included in the proposed Senate District 3 map. Apparently, Gates will be aligned with the “finger” counties as well as Dare County as those maps have yet to be released.

It was announced at the public hearing on Thursday that the complete proposed maps for General Assembly districts would be released by July 11. Meanwhile, the congressional districts are expected to be released next week.