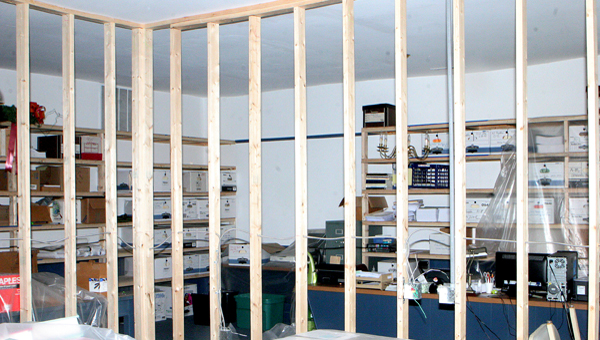 Renovation is ongoing at the Windsor Town Hall, including this area that will serve as the Town Administrator’s office as well as a storage room. Staff Photo by Thadd White

But, progress is being made.

The Windsor Town Hall remains under renovation after damage was done to the building during the floods last year.

“We were in the process of discussing renovations for the Town Hall and had applied for an energy grant which we received shortly before the flood,” Windsor Mayor Jimmy Hoggard said. “Since we had to make repairs anyway when water got under the building during the flood, it made sense to do it all at one time.”

The repairs and renovations will make the Town Hall more efficient and nicer, according to Hoggard and Town Administrator Allen Castelloe.

“It’s going to be a Town Hall people can be proud of,” Castelloe said.

Hoggard chimed in, “It will be efficient from a production point of view and something people will be proud of and we won’t have spent a ton to do it.”

In fact, thanks to the energy grant, the town will likely pay only about half of the $200,000 renovation price tag. Hoggard said the renovations would make the old building efficient and attractive without spending the $500,000 it would have taken to build a new facility.

New front doors that will be more energy efficient have already been placed at the front of the building and a new entrance way will provide both better flow and a more attractive appearance.

To the right of the entrance way, the only changes that will be made to the Commissioners Room will be to paint and put down new carpet. No other damage was done to that room.

As for the Windsor Police Department offices in the facility, a slight change will be made. Windsor Police Chief Rodney Hoggard will move his office to the back of the building in what used to be the squad room.

When walls were removed as part of the renovations, jail-type bars were found in that office space, revealing the town’s old holding cell.

“We’re going to leave the bars and just put glass around them so the chief can have privacy,” Mayor Hoggard said. “It will add a little character to the chief’s office.”

The chief’s former office and an old furnace room are being combined to make a larger squad room and to give officers more space to work.

In the back of the building, Payroll and Accounts Receivable Clerk Diane Dunlow’s office will be modified to add a secure storage area.

Upstairs, no changes will be made to the office of Public Works Director William Coburn other than paint and carpeting.

Major changes are coming to the rest of the upstairs area, however. Castelloe’s office, which is currently a pass-through to Hoggard’s, will be moved. The room formerly used for meetings of the town board and later for storage will be renovated allowing for an office for Castelloe, a work area, a server room and a storage area.

“We have needed to do something for a while and this was the time,” Hoggard said. “While we work well together, it isn’t good to have people walk through the administrator’s office to get to my office.”

In addition, all of the walls in the building are being insulated to offer better energy efficiency. Windows throughout the building have also been replaced through the energy grant.

The entire facility will be painted and receive new carpet. New air conditioning units have been put in as well.

Once the air conditioning units are in, work will begin on putting up sheet rock and then the painting, carpet and furnishings. Town officials are hoping the building will be opened within the next two or three months, depending on how quickly the work can be completed.

Until then, the town will continue to operate most services from the trailer behind the facility.

“Our employees have done a great job in make the best of the situation,” Mayor Hoggard said. “We will be even more effective when we get back in the building.”