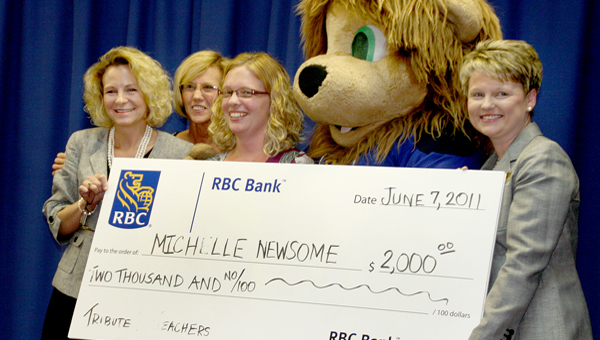 Ahoskie Elementary fifth grade teacher Michelle Newsome (center) was presented with a $5,000 check (as well as one for $500) from RBC Bank officials, from left, Deborah Fields, Jeanette Johnson, “Leo the Lion” and Anna Ryals. Staff Photo by Cal Bryant

AHOSKIE – As one of 50 winners of $500 from RBC Bank’s “Tribute to Teachers” program, Michelle Newsome of Ahoskie Elementary School said her classroom was in dire need of dry erasers.

During a program scheduled to honor Ahoskie Elementary fifth graders for their academic achievements for the 2010-11 school year, local and regional RBC officials presented Newsome with a $500 check as one of the 50 “Tribute to Teachers” program winners from five southeastern states (Alabama, Florida, Georgia, North Carolina, South Carolina and Virginia).

While Newsome was aware of that honor, she stood in total shock on the Ahoskie Elementary stage upon the announcement that she was the southeastern region’s grand prize winner, which came with an additional check of $2,000.

To the screams and cheers from the audience, comprised of mostly fifth grade students, Newsome stepped forward to receive her $500 cash prize. In the meantime, RBC mascot “Leo the Lion” slipped behind the stage curtain, emerging with an even larger check.

“It looks to me like we have a grand prize winner at Ahoskie Elementary School,” said Deborah Fields, banking center manager for RBC Bank in Ahoskie, who took part in the check presentations totaling $2,500 to a visibly stunned Newsome.

“None of this would have been possible without my kids, and the support of those who voted for me,” said Newsome after spending a few moments to collect her thoughts following such a surprise announcement. “I love you guys.”

Later during an interview with RBC, Newsome said she was in total shock upon learning of the $2,000 grand prize.

“I’m so excited, so thrilled to have been chosen for this award,” she said. “I think my students are just as exited, maybe more.”

Knowing that she was one of the $500 winners, Newsome said she had already planned to purchase some much-needed dry erase markers for her classroom.

“Now I guess I can buy more than just those markers,” she said with a broad grin, adding that the money will be used to purchase classroom technology items and reading novels.

“These kids here in Hertford County schools really need all the support they can get,” Newsome concluded. “We have so many students struggling, so many have fallen behind in their schoolwork. Something like this from RBC gives us a big boost and I am so grateful to them and to everyone that supported me along the way.”

Now in its eighth year, the “Tribute to Teachers” program has awarded over $154,000 to hundreds of teachers across the southeastern United States.

During the spring nomination period (January through March), Fields said more than 2,200 nominations were received. That large field of worthy recipients was narrowed to 50, each receiving $500 to spend on classroom materials. One of those 50 winners was also selected to receive an additional $2,000 for a classroom materials shopping spree.

“RBC Bank places a top priority in giving back to our community at the corporate level as well as personally,” Fields said. “We believe there is no better place to give back than to support and recognize excellence in the classroom and that is exactly what the ‘Tribute to Teachers’ program is all about. We value Michelle Newsome’s commitment to education and want to help provide her students with the best learning environment possible.”

This fall, RBC Bank will select an additional 50 winners from a new set of nominations for the “Tribute to Teachers” program.

AHOSKIE – Just enough. Ahoskie’s Post 102 junior American Legion baseball team may not have been spectacular in ending their... read more