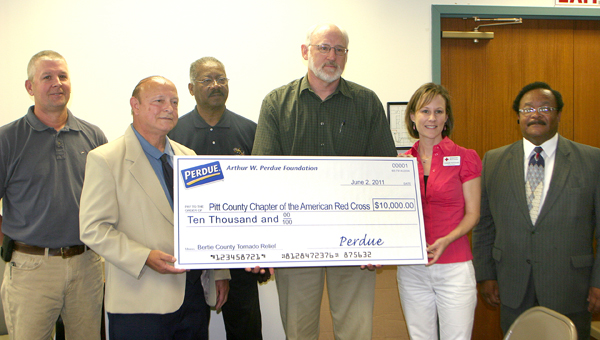 WINDSOR – Perdue continues to be one of the strongest corporate citizens in Bertie County.

Last week, Perdue, through the Arthur W. Perdue Foundation, contributed $10,000 to the American Red Cross to aid victims of the April 16 tornadoes that killed 12 in Bertie County and left droves of others homeless.

“The loss of life and devastation inflicted by the April 16 tornadoes on the residents of Bertie County, including a number of Perdue associates, is heartbreaking,” said Jeff Stalls, Director of Operations at Perdue’s Lewiston plant. “We’re proud to make this donation and are grateful to the Pitt County Chapter of the American Red Cross for ensuring the monies will assist Bertie County residents who were directly impacted.”

Stalls made the official check presentation Thursday morning to Summer Woodard and Stan Morris of the Pitt County Chapter of the Red Cross. Also in attendance were county and municipal officials including, Bertie County Commissioners Rick Harrell and Charles Smith and Askewville Mayor John Pierce.

Stalls said he was pleased to work for a company that believed in helping the community. He said the morning after the tornadoes, calls came from Perdue’s corporate office checking on the status of the company’s associates and on Bertie County in general. He said one of those calls came directly from Jim Perdue.

Bertie County officials said Perdue had long been one of the strongest allies in their efforts to aid citizens in times of disaster.

“Perdue was there for the citizens when we experienced flooding in Windsor and they are helping us again,” Harrell said. “Perdue is a very important part of the community.”

Harrell said he saw the concerns Perdue had for the community in working with the company and in his role as a county commissioner.

Bertie County Manager Zee Lamb said the company was one of the strongest corporate partners he knew.

“We are fortunate to have a corporate citizen that contributes so much to the community,” he said. “I’ve never seen anyone do so much.”

“Thank you for the donation and for all you do to provide jobs for our community and our county,” Pierce said. “Perdue is a very important part of Askewville and our surrounding community.”

Bertie County Emergency Management Coordinator Rickey Freeman was also thankful for what Perdue has done to help in times of tragedy.

“We appreciate Perdue’s consideration of the victims of Bertie County and the American Red Cross to receive such a donation to assist in the relief effort,” he said. “These funds will help meet the needs of the victims that may have not been met by other assistance.”

Woodard, who serves as Executive Director of the Pitt County Chapter of the American Red Cross, said, “We’re pleased to help direct this grant to help those in Bertie County receive additional assistance. We’ll be able to provide victims with prepaid debit cards to help meet their needs.

“It’s comforting to know we have corporate partners like Perdue to help the community in difficult times,” she added.

Morris said the Red Cross wouldn’t be able to help if it wasn’t for partners like Perdue.

“We don’t do anything by ourselves,” he said. “We are the conduit to help make it possible for people to work together and volunteer.”

He also recognized the North Carolina Baptist Men and Samaritan’s Purse for their work in Bertie County.

Perdue lost one of its own during the tornado as Peggy Leary, 60, who worked at the Lewiston plant for nearly 28 years, was killed in the storm. A dozen more associates either lost their homes or suffered serious damage to their property.

“The compassion shown by our associates in Lewiston and throughout Perdue operations is truly inspiring,” Stalls said. “This was a grassroots effort by them to help ease the suffering of some of their co-workers. It was a heart-warming gesture that reflects the integrity of our associates.”

WINDSOR – Another drug suspect finds himself behind bars. Thursday night a tip led to the arrest of Anthony David... read more