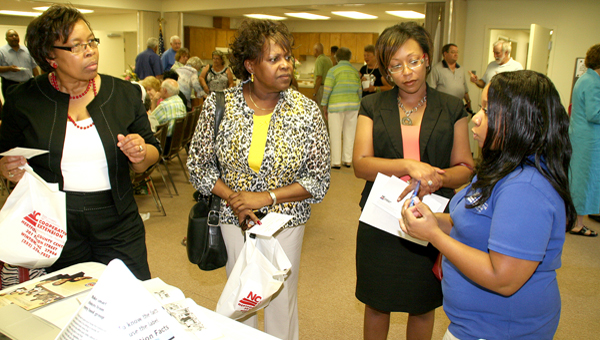 WINTON – Are you aware of the numerous services offered by the Cooperative Extension Service within your county of residence?

For over 100 individuals residing in Hertford County, that question was answered here Thursday evening.

A crowd of 110 people filled the meeting room of the Hertford County Cooperative Extension Office in Winton, each having the opportunity to learn more about the multiple programs offered by this state/county supported entity.

“We were overwhelmed by the number of people attending our open house,” said Hertford County Extension Director Crystal Smith. “The purpose of hosting this event was to expose individuals to the services we make available to our citizens.”

Apparently, that message was received.

“We had a number of individuals expressing more information on what we offer,” Smith said. “We’re also receiving feedback from the open house on our FaceBook page.”

Sara Moses of AgCarolina Financial in Ahoskie and a member of the Cooperative Extension Advisory Board, served as the emcee of the event.

As part of a special presentation, Parker-Helmkamp noted that FCS is celebrating its 100th anniversary in 2011. FCS, she said, began as Home Economics/Home Demonstration. Programs include the promotion of healthy eating habits and physical activity; home canning; financial management; and Extension Community Association (ECA) clubs. FCS is celebrating its century of service by releasing a history book that traces its first 100 years. Copies of that book are offered for sale at the Cooperative Extension Office in Winton.

Parker-Helmkamp presented free copies of the book to Rankins, accepting on behalf of the county, and to the county’s ECA Club, accepted by Dolores Benthall and Audrey Askew.

“We are blessed here in Hertford County to have such outstanding citizens who volunteer their time freely to help their communities,” Smith said.

Two individuals – Jackie Brinkley, a longtime volunteer firefighter from the Union community as well as one of the main reasons behind the annual success of Hertford-Gates Relay for Life, and Ernie Carter, who volunteers his time weekly as treasurer at St. Thomas Episcopal Church in Ahoskie as well as a volunteer for the Ahoskie Rotary Club, Boy Scouts, the Gallery Theatre, the Historic Hope Foundation and a 27-year veteran volunteer firefighter – were honored with, “the highest designation of appreciation for distinguished volunteer service to the people in the state of North Carolina.”

One group – Delta Sigma Theta Sorority, Inc. – Ahoskie Alumnae Chapter – was also a recipient of the NC Governor’s Award for Volunteer Service. The group includes over 60 active members that serve to meet the needs of citizens in Hertford, Gates, Bertie and Northampton counties. They are particularly active in mentoring at-risk young ladies.

Each of the recipients received a certificate, Volunteer Service lapel pin and a letter from North Carolina Governor Bev Perdue.

Wendy Drake, a native of Newsoms, Virginia, is the new Agricultural Agent for the Hertford County office of NC Cooperative... read more