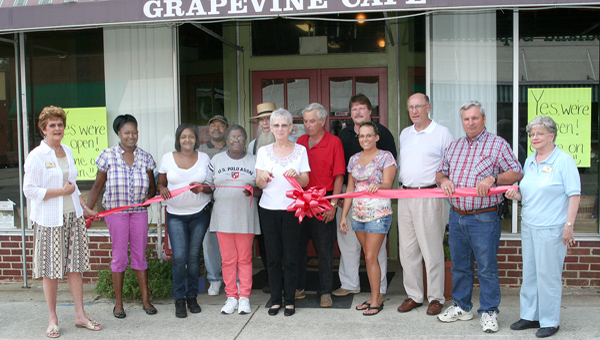 WOODLAND — A staple of this community is now under new management.

The Grapevine Cafe, located at 109 E. Main St., is now owned and operated by Barbara and Johnny Outland of Woodland.

On Tuesday, the Outlands gathered with Northampton County Chamber of Commerce and town officials to celebrate with a ribbon cutting.

The eatery, formerly owned by J.R. Weldon, has been a fixture in Woodland’s small downtown area for 14 years, and now the Outlands plan to continue that tradition.

Mrs. Outland, a Woodland native, decided to take the restaurant over after her retirement from Tarheel Casket Company, owned by her husband.

“It’s been a lifetime dream of mine to own a restaurant,” she said. “I’ve always wanted to do this.”

Despite the “new” Grapevine opening on Friday the 13th of last month, Outland said the business has been successful with customers coming from all over the region, including Ahoskie, Murfreesboro, Rich Square and Virginia.

“Everybody that comes in here I try to get to know,” said Outland. “I’ve never met a stranger.”

Outland describes the fare offered at the cafe as “country cooking,” drawing from her own country roots and her mother’s belief of throwing in a little side meat to season different dishes. The menu offers an array of items, including Outland’s famous chicken salad, fried chicken, chicken pie, cabbage and collards. Outland said there is a seafood special each Friday night as well as three different specials each day. Sunday offers a buffet.

WOODLAND—A woman here is facing a prostitution charge after being arrested by an undercover agent. According to Northampton County Sheriff... read more