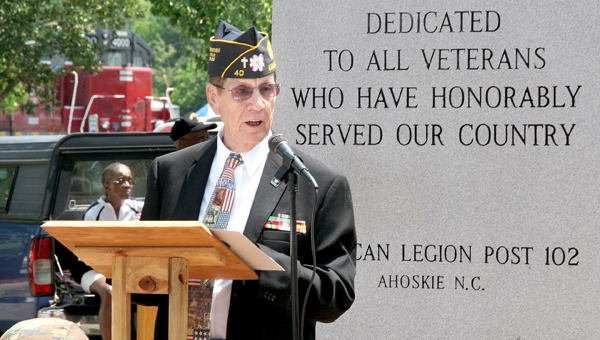 AHOSKIE – An American flag, lowered to half mast, swaying softly in a gentle breeze; patriotic music and the playing of “Taps” have become synonymous with Memorial Day.

But what is the true meaning behind this national observance always held the last Monday of May? For Dr. Jimmy Jarrell, Memorial Day stands tall upon the very values the United States was built upon.

“Memorial Day is a time for Americans to reconnect with our core values by honoring those who gave their lives for the ideals we cherish today,” Dr. Jarrell told the crowd gathered at the Park for the 11:30 a.m. ceremony. “American soldiers have died in wars and conflicts this nation has fought since the first Colonial soldier took arms in the fight for independence. Each person who died during these conflicts is a loved one cherished by family and friends. Each was a loss to their community and their nation.”

Dr. Jarrell noted that what is known today as Memorial Day was born as a passion in 1886. There, in Columbus, Mississippi, loved ones of fallen Confederate soldiers were cleaning the graveyards of clutter and placing flowers by those tombstones. They noticed a cemetery nearby, one where Union soldiers were buried, that was overgrown with weeds.

“In grieving for their own fallen loved ones, the Confederate women understood the dead Union soldiers buried nearby were cherished loved ones as well by families far away,” Dr. Jarrell noted. “They began to clear those graves as well and placed flowers on those graves. Soon the tradition of Decoration Day came about, which is now Memorial Day.”

He continued, “Memorial Day, to most, is a long weekend off of work, an extra day to go to the beach. But in some places the ceremonies to honor our military dead continue, as it does here in Ahoskie. You being present at this event means you remember the true meaning of Memorial Day. You come here to honor our fallen comrades. You understand why we honor our morals and values.”

Dr. Jarrell asked what inspires and enables ordinary citizens to rise to the challenge of battle, to be willing to make the ultimate sacrifice of their lives upon called upon wherever and whenever to do so?

“The answer is values,” he stated. “The proud values, the proud legacy of each branch of our military. Our country was founded upon basis core values – loyalty, duty, respect, selfless service, honor, integrity and personal courage.

Monday’s event also featured Bernie Jones who provided a history of the meaning of “Taps” and why an American flag is folded 13 times during a military funeral.

“Captured Hearts” of Rich Square sang patriotic songs as well as leading those assembled in the National Anthem and Pledge of Allegiance.

Students of Bertie County Public Schools look on as emergency workers begin the task of extricating the driver of a... read more