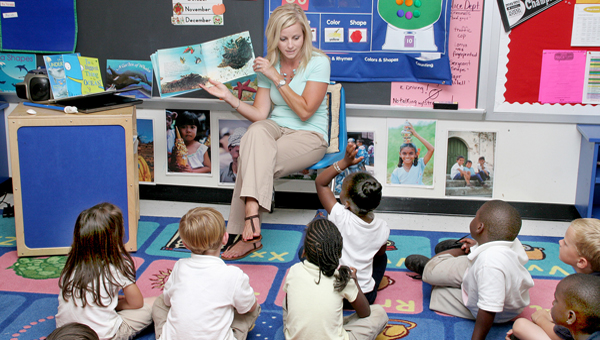 Scores of Hertford County schoolchildren are currently  wrapping up the 2010-11 academic year and making summer plans.

Meanwhile, a group of 22 Hertford County educators are pondering what the future holds – each the victim of the state’s budget axe.

Earlier this month, Hertford County Public Schools Superintendent Dr. John Fahey broke the bad news to 11 Pre-K teachers and an equal number of instructional partners (teacher assistants), informing them that the state’s proposed 2011-12 budget moves the Pre-K program out from under the Department of Public Instruction and to the State Department of Health and Human Services. He said he had no other choice than to not offer new employment contracts to those 22 instructors.

In an exclusive interview conducted earlier this week with the Roanoke-Chowan News-Herald, a group of those teachers were vocal in their concerns over why the state’s elected leaders opted to place the highly successful Pre-K and More at Four programs on the chopping block.

The group bragged on the fact that the Pre-K program at Bearfield Primary School in Ahoskie is rated “5 Stars” – the highest achievement a pre-school program can receive. Stars are based on teacher’s qualifications/education, standards within classroom and compliance records.

Bearfield’s Pre-K instructors are all are certified, all with bachelor degrees, some with Masters.

As far as their educational process to secure a job in a classroom, most all of the Bearfield teachers chose to teach at this age level, B-K (birth to Kindergarten). Now, those years of toil and labor preparing to teach young children has fallen victim to the state’s budget writers.

“I feel we’re unappreciated,” Barnes said. “I don’t think they (state elected leaders) know what we really do, who we really are. We chose to teach this age level because we love young children and want them to succeed as they move through each step of their education.”

“These teachers have worked hard to get where they are today, all the extra training, the Effective Teacher Training courses,” said Vicki Blanchard who works with Pre-K students at both Bearfield Primary and Riverview Elementary in Murfreesboro. “Now it’s all shut down…that’s a shame.”

Blanchard was also concerned about those currently enrolled in universities, working to become the next wave of B-K teachers.

“Do they change their major and put in another two years,” she asked.

Of the group that spoke with the News-Herald, they have a combined 111 years of teaching experience.

Barnes pointed out that research shows that 90 percent of brain development in a young child occurs in the first five years.

“We need to capitalize on that development; the Pre-K program does just that,” Barnes stressed.

Rose said North Carolina’s More-at-Four program (Pre-K) was one of only two in the nation honored for its significant impact on young children.

“Yet the state is doing away with it; how contradictory is that,” Rose mused.

Two local parents sang the praises of the Pre-K program.

“When my daughter first came here she couldn’t put together a whole sentence,” said Debby Perry. “She couldn’t interact with other kids; she cried for the first two months. The teachers worked with her and she has grown a lot. She can do things by herself now that she couldn’t do when she first got started; she has so much confidence now. Without Pre-K, it would have been a disaster if she had gone straight to Kindergarten.”

“The difference between day care and Pre-K is tremendous; how many four-year-olds do you know of that can speak English and Spanish, and I’m not Spanish at all,” Zoch stated. “She’s learned a lot from the teachers here, a lot of hands-on training. She’s learned about the social skills by developing lots of friends. She now begs to read; she’s writing…when she first started she couldn’t scratch a letter or a number. She is ready for Kindergarten.”

As a third grade teacher, Zoch said she has noted many of her students currently struggling with their work did not attend Pre-K.

“The ones that went to Pre-K are successful in my classroom,” she said. “Pre-K means a lot to early childhood development.”

“My little girl needs the one-on-one attention she gets in Pre-K,” Perry stressed.

The Hertford County Pre-K program serves 126 students at Bearfield (7 classrooms, each with a teacher and an assistant) and 48 students at Riverview (3 classrooms; 6 total instructors). Thirty-six students are enrolled in the Pre-K/More at Four program at Hertford County Head Start where two teachers are employed.

“What I can give to the students is meeting the emotional, self-help and social skills they need,” said Pre-K teacher Tracey Jones. “We have to first touch those emotional and social skills before we can teach one thing. They must first learn to cope, how to interact with one another.”

“I wouldn’t want to be a Kindergarten teacher without these (Pre-K) girls,” said veteran Bearfield instructor Carol Paul. “They play a vital role in setting the stage for learning in the classroom. My job is so much easier because of the foundation these ladies have laid, the biggest part of which is teaching these young children how to manage within a classroom environment.

“My children are excelling with their class work and it’s all due to our Pre-K program,” Paul added. “It’s so important that we give our children that early exposure to education.”

Building language skills is another key element of the Pre-K program.

Barnes said before members of the North Carolina House and Senate cast their final vote on the pending state budget, “they need to think about the best interest of the children.”

“We can either build more jails, or invest in education; to me that’s a no brainer,” Paul remarked. “These children badly need fundamental, basic skills and it starts when they’re young.”

“I came here ten years ago and I’ve watched our Pre-K program grow stronger and stronger,” said Bearfield Principal Julie Shields. “Why is that….it’s because of these ladies sitting in front of you right now.”

Blanchard said she could remember the day when a pre-school program only dealt with educationally handicapped students.

“All the special needs students were self-contained in a classroom, without interaction with any other children,” she recalled. “Over the years, my classrooms have changed little by little, going from 80 percent special needs to what we have today. We no longer isolate these special needs children. We help them develop the social skills they so desperately need.

“With these budget cuts, we’re going to go back where we were twenty years ago,” Blanchard continued. “Everything we’ve done over the past twenty years, all the hard work it took to evolve this program to where it needs to be will be gone.”

“The special needs population is decreasing with each grade level these children move up,” Shields noted.

The Pre-K program is growing so much in Hertford County that over 170 pre-registered for the 2011-12 academic year. Over 140 of those students met the qualifications (based on income, disabilities and English as a second language).

“What happens to those students; we don’t have enough daycare space to handle those children,” Blanchard noted. “You’ll either find more people attempting to open minimal standard daycares or you’ll see parents come off the work force to stay at home with their children. It’s not pleasant to say this, but I’m of the opinion that you’ll see child abuse, neglect and child welfare will go through the roof.”

“Without Pre-K, we’ll have to change our standards for Kindergarten and first grade,” Paul observed. “These (Pre-K) ladies help us meet every North Carolina standard on the books. We’ll have to start all over at square one without them and that’s tragic. Now is not the time to take a step backwards.”

“I’ve seen children come into this program unable to do a lot on their own, but before they leave us they grow so much,” she said. “We have a lot of kids that really need this program.”

“Because of the requirement to have Kindergarten level students reading before they enter the first grade, teaching the language skills at the Pre-K level is so vital,” Piland said. “Our county has made great strides in literacy; when I came here five years ago there were 6,000 books in this library, now there are over 22,000. We’re giving all our students more exposure to books, including the Pre-K level. I constantly see our Pre-K teachers coming in here and loading up with books to take back to their classrooms. Day cares do not have access to this many books.”

Barnes said she was still in the process of studying the results of her students, but some had grown by three years (in a single year) on vocabulary testing.

Blanchard stated one thing really bothering her over the demise of the Pre-K program is that being in a rural area, there are not a lot of other options for these young students.

“I think it’s safe to say that the state legislators voting to do away with Pre-K are from larger counties and cities where there are many educational options, so many resources for those children,” she said. “Doing away with Pre-K doesn’t affect them.”

“Unfortunately for some of our students, the meals they receive here at school are the only thing they’ll eat that day,” she noted.

“I want the legislators to put a face with what they are doing,” Shields said. “The only way they can do that is come here and see it for themselves.”

Barnes summed it all up in one simple sentence, “These children are more important than the budget.”

The cuts in education and other traditional services are not lost on one North Carolina group.

“What’s most frustrating is that these deep cuts are completely avoidable. The Senate could have chosen to protect public schools, public health and public safety simply by maintaining our current revenue stream.  But like the House, the Senate is letting the temporary tax package passed in 2009 expire,” said Together NC in a press release after a subcommittee in the NC Senate submitted its budget proposals.

“This tax package, which includes maintaining the existing sales tax rate and an income tax surcharge for high-earners, would have raised approximately $1.4 billion next year. Combined, the cuts to K-12 schools, the Smart Start and More at Four early education programs, Mental Health and Medicaid add up to only $1.2 billion.

“This is a clear-cut case of ideology trumping common sense. Now is the time for our lawmakers to show real leadership by preserving the investments that make North Carolina’s future a prosperous one,” the press release concluded.