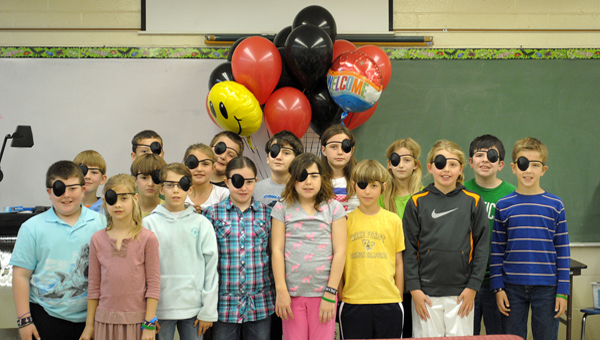 Trace Robertson (back row, center) had no idea of how his 4th grade classmates would make him feel comfortable on his first day back at Ridgecroft School following surgery on his brain. By the looks of this photo, the homecoming was a complete surprise as all members of his class wore eye patches. Contributed Photo

AHOSKIE – If a Hollywood producer ever decides to cast the lead actor for a third rendition of the classic movie “True Grit,” Trace Robertson should be given the first consideration.

Movie buffs will remember that film’s first actor – the now late John Wayne, who wound-up winning his first and only best actor Oscar (1969) for his portrayal of the gritty “Rooster Cogburn.” Last year, a re-make of the film earned high praise as well as an Oscar nomination for actor Jeff Bridgers.

But the real life version of “True Grit” is Trace, a 10-year-old Ahoskie youngster possessing a level of determination and strength not typically seen in a person his age.

Just over two months ago, Trace’s life hung in the balance. A prolonged series of progressively worsening headaches led to news neither he nor his parents – Jennifer and Truett Robertson – wanted to hear….a brain tumor.

“The headaches were sporadic at first, then they became more frequent, eventually getting to the point where he had a headache every day,” said Jennifer.

On March 4, the results of a CT scan proved upsetting to the Robertson family – a tumor, 3.7 centimeters in size, was discovered on Trace’s brain stem.

Knowing that Trace’s grandfather, Milton Robertson, died two years ago of a brain tumor, Jennifer and Truett didn’t hesitate when it came to making an immediate decision about what to do for their only son.

“Trace’s doctor (Dr. Charles Pierce) highly recommended that we need not to delay, to seek medical attention for Trace ASAP,” Jennifer said. “We discussed our options and drove to Durham that same day (March 4). The very next day Trace had an MRI at Duke Pediatric Center (in Durham).”

“That was the most agonizing six hours we’ve ever spent as a family,” Jennifer said. “All Trace was asking before he went into surgery was did he have cancer and was he going to die?”

The good news was the tumor was benign….the bad news was that due to a portion of the tumor being wrapped around the brain stem, the doctors were unable to remove it all.

“The tumor was actually blocking the flow of the fluid from the brain; the doctors had to first install a shunt to allow that fluid to travel its normal course,” Jennifer recalled.

The tumor was diagnosed as pilocytic astrocytoma. Fortunately, it’s a type of tumor that rarely spreads into surrounding tissues. Still, it’s a tumor that required major surgery to remove – both of which are unsettling to a 10-year-old and his family alike.

Trace’s immediate post-operative symptoms were disconcerting as well. After being, as his mom said, “basically out of it (asleep) for four days,” Trace was experiencing discomfort in breathing and swallowing. His right eye wasn’t responding.

“After waking up, he was unable to feed himself and could barely speak, when he did talk it was only one word at the time,” Jennifer recalled. “He had to wear a gate belt (one that attached him, for balance purposes, to those helping him walk).”

While it was upsetting to the family to see their normally active and vibrant 10-year-old experiencing trouble with the simple daily tasks most take for granted, mom, dad and sister, Hayley (age 15), discovered something they didn’t know about Trace – he’s a fighter.

“While we were still at Duke, Trace would get mad if he couldn’t walk the distance down the hall that his nurses asked him to do,” Jennifer said.

A few weeks later, Trace was moved from Durham to Greenville where he would undergo rehabilitation at the Pediatric Unit at Pitt County Memorial Hospital. There, the real Trace Robertson emerged.

“From his very first day there we saw an amazing transformation,” Jennifer remembered. “They had a covered playground, including basketball goals. He would stand by his wheelchair and, staring at the goal with his good eye (the right one was protected by a patch), take aim at the basket and shoot, and shoot, and shoot. He wanted that ball to go in, and it did.”

From there, Trace begged the nurses to let him walk up and down the hall. He progressed to the point where he needed only one nurse to assist him, eventually getting to where the gate belt was no longer needed.

“I saw something in my son I never saw before; I had no idea he had this level of determination,” said a proud mom.

While at Pitt, Trace was able to keep up with his schoolwork through the aid of a certified teacher employed by the hospital. His spirits were boosted even higher by a visit (and a basketball shoot-around) from “Mr. Wolf” – the NC State University mascot.

“He (Mr. Wolf) got on his hands and knees and let Trace stand on his back and dunk it,” Jennifer said.

On March 30, Trace spent the first night in his own bed since March 4. The eye patch was still in place, but Trace was now walking without assistance and ready to return to the lifestyle of a 10-year-old.

He and the family also came home to what is typically found in a small-town environment, a small army of warm and caring people that embraced the child and the family, offering words of encouragement.

“Everyone has been so loving, so thoughtful of Trace and of the entire family; some were total strangers,” Jennifer said. “There were fundraisers and raffles held to help us in our time of need; prayer chains; and even ‘Pray 4 Trace’ wrist bands. People brought dinner to our home. It’s that type of support, that type of love, that makes Ahoskie and the surrounding communities such a great place to live and raise a family.”

But one giant step remained – going back to school. Mrs. Robertson was worried on how her son would be accepted by his young peers, especially having to return to the classroom wearing an eye patch.

Those fears were calmed on his first day back in Jill Martin’s 4th grade class at Ridgecroft School where mother and son were greeted by a roomful of students sporting patches over their right eye. Even the school’s headmaster, Elton Winslow, dropped in, also wearing an eye patch.

“That was really cool. I really didn’t know how Trace would handle going back to school…how he would be accepted by his classmates, particularly with his still not-perfect speech. But they’ve welcomed him back in; it’s just like he never left,” Jennifer said.

“The Ridgecroft staff and students have really rallied around Trace and the entire family,” she added. “We found out after the fact that the entire student body had filled the hallway, held hands and were led in prayer by Mr. Winslow on the day of Trace’s surgery.”

Since his return to school, Trace has been doing quite well with his academic work.

Mr. and Mrs. Roberson remain cautiously optimistic about their son’s recovery. Trace is undergoing rehab locally. Jennifer works with her son on the balance beam at ViQuest; Truett is out in the yard honing Trace’s baseball skills.

“His motor skills and coordination are getting better; simple things like tying shoes, buttoning pants, things we take for granted, have come back,” Jennifer said.

So has Trace’s love for the sport of baseball. However, he is under doctor’s orders not to participate in a contact sport for one year. While he can play baseball, he isn’t allowed to field the position he loves the best – catcher.

“That was upsetting to Trace, but eight weeks ago I  wouldn’t have imagined he’d been playing any sport. It’s been an amazing transformation,” Jennifer noted. “From the first day of seeing him in a wheelchair, seeing him look so sad, to see him playing baseball eight weeks later…all I can say that it’s amazing. But I have to give the credit to Trace, he set his mind to do these things, his determination was something to behold.”

Despite the mental anguish accompanying their son’s medical ordeal, if there was one silver lining, Jennifer said her family has discovered a new-found strength within their souls.

“March was a trying month, but it brought us a lot closer together as a family,” she said. “I believe my marriage grew stronger; Hayley was able to make it through the month with good grades at school despite missing so many days.”

“There are so many people, some many groups to thank for the support they showed to my family,” Truett said. “Particularly, Ridgecroft School, Ahoskie United Methodist Church and Elm Grove Baptist G.A.’s.”

And for Trace – he may not know of either John Wayne or Jeff Bridgers, but he knows the feeling of what it’s like to display True Grit.

Bertie County Sheriff’s Deputy Jerry Bond lights a row of candles in memory of the 12 lives lost in the... read more