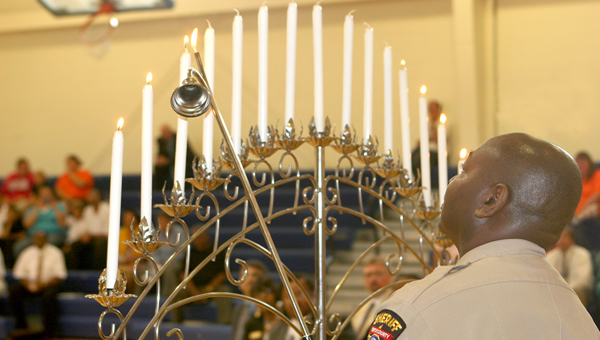 Bertie County Sheriff’s Deputy Jerry Bond lights a row of candles in memory of the 12 lives lost in the county on April 16 where two tornadoes left a deadly trail of destruction. Staff Photo by Thadd White

That message came through several times Tuesday evening when citizens of Bertie County gathered to honor the memories of those who lost their lives in the tornadoes of April 16.

Elected officials, leaders of the faith-based community and others spoke to a group at Bertie Middle School as they honored the lives of those killed by nature’s fury.

“Sticks and stones may break my bones, but words will never hurt me,” Bertie County Superintendent of Schools Dr. Debbie Harris-Rollins began. “I heard that when I was a child, but we learned that words can hurt, but they can also heal.”

Dr. Harris-Rollins suggested that those who were still struggling with the loss of those they loved or the loss of their home hang on to one simple word: endure.

She said enduring meant “carrying through despite hardships” and suggested that people remember they are passing through a tough time.

“The tornadoes of last month thrust Bertie County into hardships, but we are carrying through,” she said.

Dr. Harris-Rollins also reminded those in attendance that as you’re going through something bad, eventually you reach halfway. Then, she said, you’re past the going through and heading into the coming out.

She closed by saying, “You will not go through this alone.”

The Rev. Vonner Horton, Pastor of Oxley Hill Missionary Baptist Church, said she had thought about the same thing – enduring and going through.

She read Isaiah 43:2, “When you pass through the waters, I will be with you; and through the rivers, they shall not overflow you. When you walk through the fire, you shall not be burned, nor shall the flame scorch you.”

Rev. Horton said God was the way to make it through such a terrible time.

“On April 16, we didn’t know what we were going to go through and on April 15, we wouldn’t have thought we could have made it, but here we are,” Rev. Horton said.  “God will always make a way.”

The Rev. R.O. Denton Jr., Pastor of Askewville Assembly of God, started the evening with an invocation, asking God to be with those who had suffered loss.

He asked God to “help in this time of helplessness.”

“We pray that you will give special grace and special peace to the family members who are suffering,” Rev. Denton said.

Following his invocation, members of the Bertie County Board of Commissioners offered their condolences and thoughts.

“This is a happy day and a sad day,” Commissioner Charles L. Smith said. “We are happy that we are here, but sad because of the devastation.”

Smith said he toured the damage first-hand the morning after and saw devastation, but also saw people working together and smiling together despite the loss.

Commissioner Norman M. Cherry Sr. said he understood some of the pain people were going through.

“In some ways I feel your hurt and pain,” Cherry said. “The storms of 1984 were my family and friends and happened on my street.”

He said he was extremely proud of Bertie County and the way the county had worked together during the storms.

The Rev. Don Roberts, Pastor of Colerain Baptist Church, read Ecclesiastes 3, reminding people there was a time for every season.

“April 16 was a time of loss, but since then there has been a time of healing and a time of remembrance,” Rev. Roberts said.

The Rev. Mary Drake, Pastor of First Baptist Church of Colerain, offered a prayer for the victims, families and community.

As part of her prayer, Rev. Drake said, “Weeping may endure for the night, but joy will come in the morning.”

Bertie County Emergency Management Coordinator Rickey Freeman acknowledged all those who helped in the efforts.

“To all agencies and people – whether you did many things or one – thank you on behalf of Bertie County and may God continue to shower His blessings on you,” Freeman said.

Senator Jones reminded people that God had not changed.

“If it wasn’t for bad times, we wouldn’t know how to enjoy the good times,” he said.

“To the residents of Bertie County, I offer my deepest condolences to your community, and to those of you who lost a loved one form the storms that hit North Carolina in April,” Senator Hagan wrote. “I toured the tragic destruction in Colerain throughout the Perry School Road neighborhood two days after the storm hit and I heard stores of devastation and grief, and of incomparable loss. The images and the stories from that visit will stay with me for the rest of my life.”

Senator Hagan also wrote how she was struck by the acts of courage and kindness in the county.

“All across Bertie, I witnessed these expressions of support and strength and it moved me deeply,” she said. “Please know that the thoughts and prayers of myself, my office and the entire state continue to be with you in this time of mourning.”

Governor Perdue also sent a letter that was read on her behalf by Mira Jones.

“Today I join you to pause and reflect upon the lives lost and the devastation that has changed this region,” Governor Perdue wrote.

She said she knew many lives were changed forever by the storms and that she was aware of the tragedy and also of the tremendous work of those in the community.

“Bob and I join Bertie County in honoring the lives lost and in recognizing the men and women of law enforcement, emergency management, social service agencies and organization and all whose dedication is helping Bertie County and all of North Carolina rebuild and heal,” the Governor said. “We are grateful for their commitment and for giving us hope and inspiration during this challenging time.”

Rev. Horton led the recognition of those who lost their lives. She read the names of the 12 victims and a candle was lit for each.

In closing, Commission Chairman L.C. Hoggard III thanked everyone for coming and reminded those in attendance to trust in God to get through the tough situation.

Musical selections during the event were done by Torrey Hines of Bertie High School and Clint Freeman.

WINDSOR — Bertie County will hold a ceremony in memory and honor of the victims and survivors of the April... read more