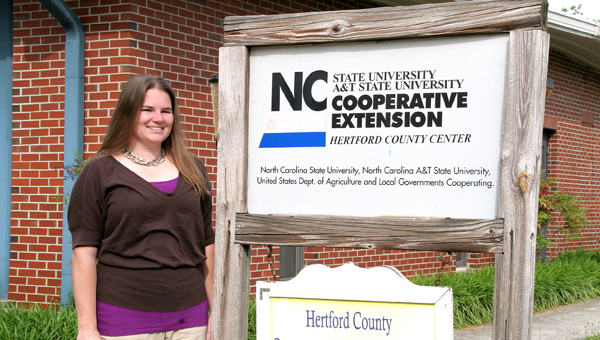 Wendy Drake, a native of Newsoms, Virginia, is the new Agricultural Agent for the Hertford County office of NC Cooperative Extension. Staff Photo by Cal Bryant

WINTON – At an early age, Wendy Drake had a pretty good idea of what direction she wanted to take professionally. After all, she lived it every day.

Now armed with several degrees from NC State University, Drake is living out that dream as the Agricultural Agent for the Hertford County office of North Carolina Cooperative Extension. She was hired in March following a short career as an ag teacher at Bertie County Early College High School.

“I grew up on a farm; I love it and wanted to learn more,” said Drake, a native of nearby Newsoms, Va. where her family remains involved in a 1,200 acre farm growing peanuts, cotton, corn, soybeans and wheat as well as maintaining a small herd of beef cattle.

“Being able to use my education and come back to a farming area to help our local farmers is a dream come true,” she continued. “I still work on the family farm with my dad when I have the chance. That’s what I like to do; I’m an outdoors person and don’t mind a bit getting my hands dirty. I hate having to wash clothes covered in dirt and grease, but it doesn’t bother me one bit of the reasons why my clothes got that way.”

The daughter of Michael and Rebecca Drake, Wendy is a 2004 graduate of Southampton County (Va.) High School. She furthered her education, graduating from NC State University in 2008 with a BS in Agronomy with Concentrations in Crop Production and Soil Science and a Minor in Agricultural Business Management. She went on to obtain a Masters Degree in Crop Science, focusing on peanut production and crop rotations.

“When I decided to go to college I wanted to study something that would let me have an outside type job,” Drake said. “My last year in high school I worked with Helena Chemical Company (Courtland, Va.). I did tissue samples for them. I started work at 5 a.m. so I could get off at 3 (in the afternoon) so I could go home and work with my dad.”

Drake also worked with Helena Chemical as a summer intern following her freshman year at NC State. Another training opportunity followed as she worked as an intern for three years with the NC Crop Improvement Association of Raleigh. That job entailed seed inspections and processing seed samples.

“That was a good learning experience,” she said.

Drake said farming, in general, has changed just like everything else.

“It has become technologically advanced,” she noted. “And that’s a good thing when it comes to controlling pesticide use and land erosion prevention. Having all the technology and the years of research has led to farmers using reduced tillage measures and increasing organic matter, thus reducing land erosion problems. The use of GPS (Global Positioning Satellite) technology makes it very precise for farmers, allowing them a way to make sure they are not overusing or over spraying pesticides. They can now use technology to calculate the exact rates of pesticide applications. It has helped farmers become more environmentally friendly.”

Still, said Drake, taking the plunge into a computer-crazed world is a big step for many small farmers.

“Even on our farm we’re still changing, still making the transition,” she said.

Drake said she offers her expertise in helping local farmers navigate their way into the strange world of computer technology.

“We have a program here that we’ll soon get started called the FACT program,” said Drake, referencing Farmers Acquiring Computer Technology, one that will be introduced in collaboration with Roanoke-Chowan Community College and North Carolina A&T State University.

Drake said that program will involve a series of classes on basic computer skills and how to create a website.

“It will help encourage farmers to utilize the available technology,” she stated.

Another program close to Drake’s heart is the Ten Percent Campaign – to track spending habits with a goal of keeping money in the local area. That includes a pledge of spending at least 10 percent on food products produced in North Carolina – Drake said an even loftier goal would be to pledge to spend 10 percent on ag products grown in Hertford County.

“You sign up online and every week you report how much you spent on purchasing state or locally grown products, whether that’s in a grocery store, in a restaurant, from a roadside stand or even if you grow your own,” she said. “We want to keep our local economy strong; we want to keep our state strong and we can do that by supporting our local farmers by purchasing locally grown products.”

Drake touched on the subject of farmers who are looking to expand their opportunities through alternative crops.

“My recommendation for anyone looking at alternative crops is that you first need to find your niche; find something that no one else is producing or producing in a limited quantity. You also need to do research and decide if you want to market it locally or on a broader scale,” she stressed.

“The more diversity we have here locally and in the state, the better we’ll be in the long run,” Drake observed. “There’s a range of different types of crops,” she said, adding that herb sage is now popular among local farmers. “But don’t jump into one just because someone else has. Do your research and find the one that you feel is right for your farming operation.”

As far as what Drake sees in her immediate future, she was quick to toot the Cooperative Extension horn.

“We’re here to empower people by providing solutions,” she said. “We want to build healthier lifestyles in the county. We want to increase agricultural awareness in the county. I want our farmers to continue to be successful and help them find solutions to any problems they may experience. That helps us maintain a strong agricultural economy, something that Hertford County has enjoyed for many years.”

Even at a young age, Drake has noticed a general lack of knowledge by the majority of the public towards agriculture.

“I’m a big fan of agriculture,” she admitted. “I’ve been to school and I’ve met lots of different people and the agricultural awareness of many is very low. That’s sad. It’s sad to know that many people don’t understand what’s going on out their own backdoor. I’m here to build up that knowledge; help people understand the importance, the impact that our farmers have on the local community, the state and the world. On the other hand, I’m also here to help our local farmers maintain their success.

“We work as a team here at Cooperative Extension; we have a lot of resources at our disposal; we are here to provide answers, provide solutions to the citizens of Hertford County,” Drake stressed.

As far as her future plans are concerned, Drake was adamant in the fact that she wants to stick around for a while.

“I’m really, really excited about this job, this opportunity to help the local farmers and local citizens,” Drake said. “This is what I went to school for and I want to put that education to good use and I can’t think of a better place than right here to do so.”

The fact that she’s not too far from home is also a major factor in being satisfied in her current environment.

Then there’s a certain young man in her life that will perhaps lead her to enjoy a long and successful career locally. Drake is engaged to Adam Burgess of Conway, a member of a farm family with its roots buried deep in the fertile soil of Northampton County. They met while both were enrolled at NC State and will marry in September.

“I plan to be here for a long time,” she said. “I’ve enjoyed meeting the farmers here and am looking forward to meeting all of them.”

“It’s an exciting time right now in Hertford County….the farmers are out in the fields, turning the soil, planting crops,” she noted. “This time of the year and the harvest season are my two favorites.”

Drake was also excited about the future of farming.

“We have good prices right now, granted there are high fuel and fertilizer prices as well, but the demand for our crops is growing by leaps and bounds,” she said. “I’m happy to be in an area that can help meet those demands. Peanuts and tobacco are making comebacks, but cotton is definitely the king here. Cotton prices now are as high as I’ve ever seen them. Corn and soybean prices are also high. I just hope we’ll have a great growing season without a lot of weather-related headaches.”

For more information on the services offered at the local Cooperative Extension office, call 252-358-7822.

WINTON – Higher assessed property values are traditionally accompanied by a lower tax rate. Such is the case of Hertford... read more