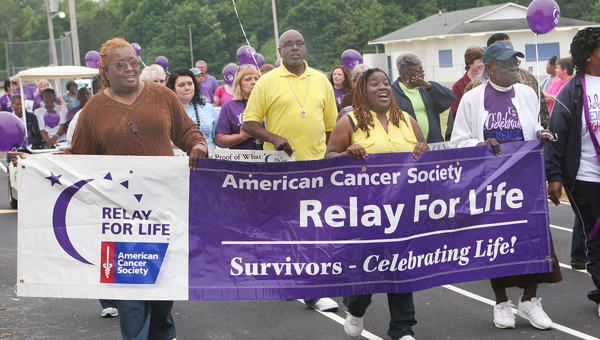 WINDSOR – It was successful on every level.

Friday and Saturday hundreds gathered inside Roy L. Bond Jr. Stadium on the campus of Bertie High School to continue the long battle against cancer. The annual Bertie County Relay for Life was kicked off at 6 p.m. Friday under overcast skies, but the event never was threatened by weather.

“I was thinking the whole time it was going to rain, but it held off,” event co-chair Anita Hoggard said. “It was a beautiful weekend.”

And the beautiful weekend was about more than just the weather as the annual event ended with $143,752.09 being raised to fund cancer research. Adding in the additional $36,260 that is still to come in from corporate donors and payroll deductions and the total for the year edges past $180,000.

“We’ll make our goal,” Hoggard said. “I reminded the teams Saturday not to let this be the end, but let’s go out and raise the final $6,000 to meet our goal.”

The event started with an opening ceremony in which those who have survived their fight with cancer were recognized.

Hoggard and fellow chair Codie Bartley began the event by welcoming all those who attended.

Hoggard talked about the floods and tornadoes that have ravaged the county and how wonderful it was that the fight against cancer still went on despite other tragedies in the county.

“We may be bruised, but we’re not broken,” she said.

Bartley then led a moment of silence to remember those who lost their lives during the tornadoes of April 16 in Bertie County. Bartley also said she was proud of the county coming together.

New Bertie County Schools Superintendent Dr. Debbie Harris-Rollins welcomed everyone to Bertie High School. She talked about the fight against cancer and the reason for Relay.

She asked people to consider hope.

“Christopher Reeve said, ‘Once you choose hope, anything is possible’,” Dr. Harris-Rollins reminded the crowd.

She closed by making everyone know the school district supported the event.

“I want to bring to you a greeting, a welcome to Bertie High School and our commitment to join you on this journey,” she said.

After the welcome, Christine Dudley recognized those who have survived their fight against cancer, calling out each name. As a survivor, Dudley said she was pleased to see so many survivors in attendance.

“As a survivor myself, it is very important that you are here to celebrate with us,” Dudley said.

Following their recognition, cancer survivors and their caregivers took the first lap around the track and officially kicked off the event. The others in attendance lined the track and clapped as the survivors went by.

“That’s the most rewarding point,” Hoggard said. “When the survivors walk, I felt like we had done a good job with getting everything together. It made all of the long hours and hard work worth it.”

That lap was followed by everyone participating in the event taking a lap around the track which filled the surface as each helped open the event.

It wasn’t long after the event started that the music of Steadfast, a local gospel quartet, filled the air as a group gathered in front of the stage to hear their musical talents.

Then, the Indian Woods Baptist Church Choir took their turn on the stage and again a big crowd gathered.

Shortly after the choir ended their musical celebration, it was time for the annual luminary ceremony. During that event, the names of those who continue to fight cancer and those who lost their battle with the dreaded disease were shown on a video screen.

Meanwhile, luminaries bearing those names lined the track and a HOPE luminary was in the home football stands.

The remainder of the event featured theme laps, more entertainment and an announcement of the amount of money generated during the fundraiser.

Hoggard said she appreciated the work of Bartley and the other committee members in making the 2011 Relay for Life a success.