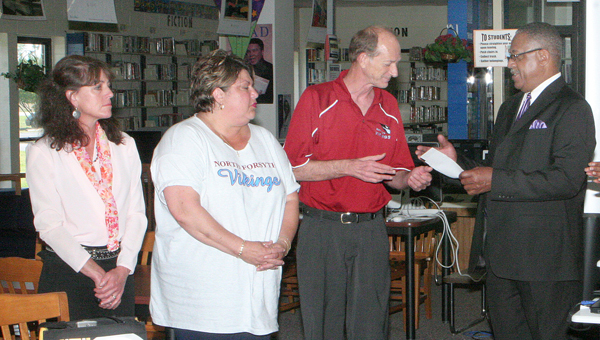 That was the message of Ken Winfrey, President of the North Forsyth High School Athletic Booster Club on Tuesday when schools from all over Forsyth County paid a visit to Bertie High School.

Winfrey was joined by other booster club officials, students and staff from the county as they presented a check for over $4,000 to aid victims of the April 16 tornado.

“I was watching coverage of the incident and I saw Fayetteville, Raleigh, Sanford and Bertie County and all the devastation that occurred,” Winfrey said. “I called members of our board and asked if we could pledge $500 towards aiding those who were affected and everyone was in favor of it.”

Tuesday afternoon, the group of visiting students, staff and booster club officials gathered in the Bertie High School Media Center where they met with local students and staff and heard first-hand accounts of the damage.

“We are glad you are here in Bertie County,” BHS Principal G. Fisher Mitchell said. “We didn’t know we had friends from so far away.”

Mitchell said the entire county had learned much during the past several weeks.

“In school, we teach about tornadoes and do drills,” he said. “We tell people if they are in mobile homes that they should take shelter in brick homes. This storm tore down brick structures.”

Following Mitchell’s welcome, Media Coordinator Bonnie Burkett shared photos of the tornado and of the damage it caused throughout the county.

Bertie High School junior Keilah Howard talked about how her home was literally ripped from the foundation around her.

“We heard about it early (severe weather forecast) in the day, but didn’t take it very seriously,” she said. “People take it lightly and they shouldn’t.”

She said they did move the family vehicles to one side of the yard because of fear of a tree being uprooted, but otherwise pretty much went about their normal routine with everyone in different rooms.

Howard said later they all went to the door and they heard a roar, like a train, and then it turned quiet.

“It got dead quiet and there was a shadow around the house,” she said. “We saw the hail coming.”

She said three of the family, including herself, went to a closet while two others went for a bathroom. None made it.

“The house started to shake and before we could get in the closet, the roof went up and debris started falling all over us,” Howard explained.

She said the group began to pray and the storm was quickly gone. She said a brick home across the street was completely gone.

“It was devastating, but we made it,” she said.

Mitchell then recognized members of the Bertie County Schools staff who were affected directly or indirectly.

Bertie STEM High School Counselor Sharon Tann said she was out checking on students the night of the storm and saw some bad sights.

“It was very devastating,” she said. “What you see today will be nothing like the day it happened.”

Personnel Administrator Fannie Williams said she spent 10 years as Principal of Colerain Elementary School and went to check on her former students. She said it was a tough thing to see the homes that were destroyed and the lives affected.

Norman M. Cherry Sr., an Assistant Principal at BHS, said he saw all of the areas because of his role as a Bertie County Commissioner.

“It was sad and devastating, but it was amazing to see the people of this community come together,” Cherry said. “We are what is called an ‘economically-challenged’ community, but that didn’t mean anything. We all worked together.”

Bertie County Schools Public Information Officer Brent Todd said the devastation in the area around his home was shocking.

“We didn’t recognize where we were and we’ve lived there for 20 years,” he said of his family. “All the landmarks were gone.”

Todd said he spent time in Missouri, which is known for tornadoes, but never saw anything similar to what happened in Bertie County.

“I lived in Missouri for 10 years in what is called tornado alley,” he said. “I never saw this type of destruction.”

BHS Athletic Director Marvin Rankins said he got a call that many of the homes in his father’s neighborhood were destroyed and went to check on his dad. He said the devastation he saw was seared into his mind.

He also thanked those from Forsyth County for coming to the aid of Bertie County students.

“Thank you for being here,” he said.

Winfrey then presented a check to Mitchell in the amount of $4,515.

“Thank you,” Mitchell said. “This will go directly to nine families in Bertie County.”

In attendance with Winfrey and the students was Leslie Karpinski, the Booster Club President at Reynolds High School.

Following the presentation, students and staff members took a tour of the areas that were affected by the tornadoes.

Winfrey said he and the others from Forsyth County were thankful to be able to help.

“We raised this money in roughly four days,” he said. “We thought it was important to raise as much as we could as quickly as we could and get it into the hands of those who need it. It has been a labor of love to help our fellow students.”

Winfrey said he appreciated working with Rankins in making plans to come to Bertie County and the support of Forsyth County Assistant Superintendent David Burleson in giving the okay for the students and staff to make the trip.

Courtney Byrum (left) is joined by Sharon Tann as they place toys, donated by the U.S. Marines, inside a vehicle... read more