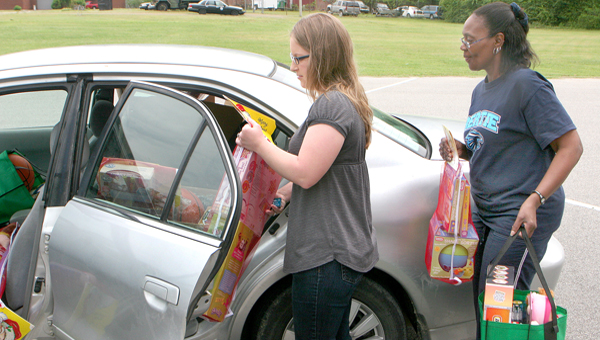 Courtney Byrum (left) is joined by Sharon Tann as they place toys, donated by the U.S. Marines, inside a vehicle for distribution to Bertie County children affected by the April 16 twin tornados that struck the county. Staff Photo by Thadd White

Following the tornadoes that destroyed dozens of homes and damaged more, there have been many organizations offering assistance to Bertie County citizens.

Those organizations have provided many of the needs of those who have suffered losses – food, clothing and personal hygiene supplies. Children, however, need more than the essentials to have a healthy and happy life.

“Toys for Tots contacted us and said they knew many had provided for the needs for the children who had lost everything,” Bertie County Schools Assistant Superintendent Carol Atkins said. “They wanted to provide the things that make it fun being kids.”

Atkins said the school district compiled a list of approximately 40 children that were affected by the storms and provided the ages and sexes to Toys for Tots.

They sent the toys to the school district last week. On Thursday, Atkins was joined by Colerain Elementary School Counselor Courtney Byrum and Bertie STEM High School Counselor Sharon Tann as they worked to sort and deliver some of the items.

Atkins said the U.S. Marine Corps Toys for Tots program that provided the toys was headed by Jerry DiNunzio. Marvin Fitzgerald of the U.S. Army also aided in the effort.

“The support for the community from all over has been tremendous,” Atkins said. “The children need as much support as they can get as they get over the physical losses and face all of the struggles they have.

“We know they have food, water and clothing,” she added. “Their needs are being met, but it’s great for them to be able to have some fun stuff too.”

The toys are being distributed to students of Bertie County Schools and those who may not be students, who could be identified by the district.

BMH prepared to handle the worse