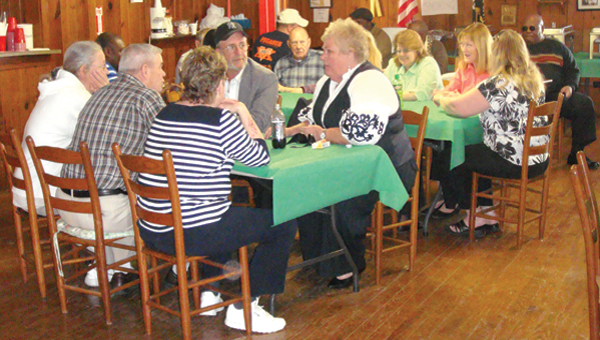 Former employees of the Gates County Correction Center and their guests enjoyed a recent reunion held at the Sunbury VFW building. Photo by Tara Kinard

SUNBURY – You have never heard so much fuss — especially from a room full of law enforcement (in this case, to be more specific, retired correctional officers) – as was heard at the VFW building located on U.S. 158 near Sunbury.

Not only was there a fuss, it was in the form of laughter; laughter and chatter so intense that it bordered on hysteria.

“They gave me the worst job of the year,” said Tyrone Carter (T.C.). Carter was seated at the entrance collecting money from attendees, which was to go toward food and the cost of renting the building.

A group of more than 70 retirees who served in various capacities (guards, instructors, superintendants, etc.) at the Gates County Correctional Center prior to its closing two years ago celebrated their first reunion. It was the first of many to come; the group decided to continue gathering every year around the same time.

James Everett was the man in charge, so to speak.

“What I attempted to do was get all of the employees that worked at Gates together one more time,” said Everett.

Everett, a guard who worked at the Gates County Correctional Center for 17 years, took the liberty of organizing the gathering.

“It was just something that’s been on my mind,” said Everett. “When we see each other it’s usually because someone passed.”

Prior to his position at the Gates County facility, Everett worked for over a decade at the Odom Correctional Institute in Jackson. The relocation was quite a transition for Everett…Odom being so much larger and more modernized.

“I wasn’t used to that in a prison setting,” explained Everett, describing his first day on the job where upon entering the dining hall he noticed a rinse tub, half-filled Everett couldn’t resist — “What is that for?”

The tub, he was told, was there so that when inmates finished eating they cold wash their trays.

“I had never seen anything like that,” said Everett with a smile.

Another factor that took Everett by surprise was the drastic difference in the two faculties position on security.

Also, at Gates County, the inmates had to go outside in order to get to the lunch hall — an idea that was completely foreign at Odom, a high security prison.

Despite the minimal security precautions, from all accounts, the Gates County Correctional Center was a peaceful place to work.

Austin Weeks, who retired as a superintendant following 20 years of service to the prison, spoke highly, not only his colleagues, but also with a tone of respect for the prisoners.

“Oh it was a sweet campus,” said Weeks. “There were very little problems with inmates and only the occasional escape.”

In a sense, the officers were lucky to have such seemingly complacent, cooperative inmates.

“They came in, did their time and went home,” said Weeks.

But the prisoners were pretty lucky too — they got to enjoy the fruits, well vegetables, of their labor.

The inmates tended a garden on the prison grounds, which not only curbed idleness, but also, according to Weeks, saved the state an estimated $35-36,000 annually on produce.

“They were the only prisoners in the state of NC to eat corn on the cob while incarcerated,” said Weeks.

Everett formerly welcomed everyone and kicked things off with a little trivia:

A:  “Well, I think it was right after the pyramids…”

Q: “Who worked at Gates the longest?”

Twenty seven years turned out to be the longest stint among the retirees. The honor is held by Carl Coston.

These two gentlemen still meet for breakfast at the McDonalds in Ahoskie on occasion. Now, they, along with all of the others, have another tentative date to meet. Next April, same time, same place.

Five arrested in series of crimes