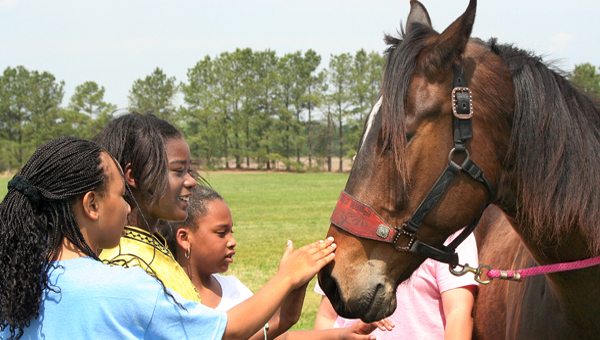 SEABOARD — Many children in Northampton County may not know it, but just outside their door is a classroom.

In the fields that grow crops and in the barns that hold cows and chickens are not only the source of their food, but an educational gateway to agriculture, science and even a little bit of history.

Northampton County Agriculture Extension Agent Lee Tyre said the event is typically held in the fall, but was bumped to spring time to accommodate this year’s fourth graders.

“The agriculture, science and history match up with the fourth grader’s curriculum,” he said. “Our main goal, since agriculture is such a huge part of our county, is to educate. There’s a real disconnect between the general public and the less than two percent that feed them.”

Animal Ag Day also aligns well with the Extension’s youth programs, including embryology and vermicompost, which are brought to some of the schools throughout the county.

The students made their way around to different stations that featured a guest speaker to talk about different subjects, including chickens, horses, the history of agriculture, pigs, 4-H and vermicompost, crops, goats and steers.

For many of the students it was the first time they have experience an up-close encounter with a farm animal.

For Gaston Elementary student Malaysia Moody, 11, of Gaston it was a small, fuzzy chick that got her attention.

“The baby chick felt soft and was fun to play with,” she said. “I learned that we eat about eight million chickens in a year and a goat fights predators with its horns.”

It was the tiny chicks that also interested Northeast Academy student Katie Etters, 9, of Conway

“I’m a big fan of chickens,” she said. “I always wanted to touch a chicken.”

Etters said she enjoyed herself at the event.

“I like seeing the animals and what they eat,” she said.

Northeast Academy student Noah Lassiter, 10, of Conway said his grandfather owns a farm and raises cows and pigs so he is familiar with agriculture and farm animals. However, it was seeing Moonshine, the horse, that really piqued his interest.

“I like the horse because it’s big and tall and he was a boy,” he said.

“I liked the horse because it’s big,” he said. “I’ve never been that close to a horse and I got to feed him.”