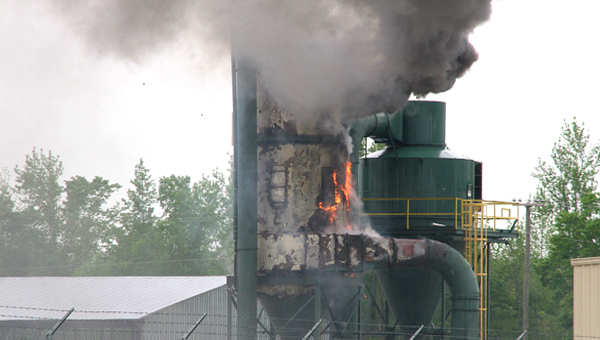 Smoke pours from what appears to be a silo located on the property of the Enviva plant in Ahoskie, a facility currently under construction. Staff Photo by Cal Bryant

AHOSKIE – Members of the Ahoskie Town and Rural fire departments were quick to extinguish a blaze here Thursday afternoon at the construction site of the new Enviva plant.

According to Ahoskie Fire Chief Ken Dilday, a spark from a torch being used to disassemble an old piece of equipment once used at the former Georgia-Pacific plant was to blame on causing the fire.

“The old bag house at the G-P plant was being taken down to make way for the new Enviva operation,” Dilday said. “There was some sawdust still inside the old bag house, which was ignited by a spark from the dismantling process.”

Both Ahoskie fire departments responded to the 3 p.m. call, bringing nine men and three units, and were able to bring the blaze under control within 30 minutes.

“I guess it looked a lot worse than what it turned out to be,” Dilday said, referencing the heavy black smoke that blanketed Memorial Drive in the area of the Ahoskie Commons Shopping Center. “Once we got on the scene and assessed the situation, we were able to knock out the fire in a quick manner.”

Enviva officials praised the Ahoskie firemen for their fast response.

“From what we’re being told by our people there at the Ahoskie construction site, the response of the local firemen was very quick and professional,” said Elizabeth Woodworth, Director of Marketing and Communications for Enviva, based in Richmond, Va. “We have processes, safety measures, in place in the event of something of this nature occurs and all those processes fell precisely into place on Thursday. What we’re extremely thankful of is that there were no injuries by any of our employees, the construction contractors on site or the Ahoskie firemen.”

Woodworth said the fire, contained to that one area of the property, would not hamper the ongoing construction of the wood pellet processing plant, scheduled to open later this year.

Meanwhile, Dilday said he was impressed with how the Enviva team handled the situation.

“Enviva worked with us well; there was quick and professional communication between their staff and our firemen,” Dilday said.

The Ahoskie firemen left the scene at 5:28 p.m. Dilday said his department returned twice Thursday night to the fire scene, but not because the blaze had rekindled.

“Enviva stationed a fire watch team at the bag house and we simply went out to use our heat-sensitive gun that checks for hot spots; we didn’t find any,” he said. “We left some fire hose there overnight for Enviva to use just in case it rekindled, but fortunately they didn’t have to use it.”

Hertford County EMS also responded to the fire scene as a precautionary measure.

AHOSKIE – Excessive speed and suspected alcohol use are being listed as contributing factors of a deadly motor vehicle accident... read more