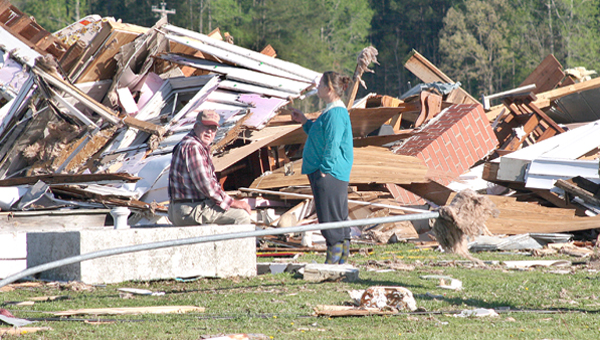 This frame house on West Askewville Street was among those destroyed on Saturday evening when a confirmed tornado cut a wide swath of destruction through the heart of Bertie County. Staff Photo by Thadd White

That’s the way most people in Askewville and the surrounding community are describing the devastation left in the wake of tornadoes that ripped through this central Bertie County town Saturday evening.

“It’s just shocking – hard to believe,” said one resident as he surveyed the damage to his property.

Damage in the town and its outlying areas begins on West Askewville Street and extends down a side dirt path where more than half a dozen mobile homes were completely destroyed. Debris was found as high as 40 feet off the ground in trees.

In addition, there is extensive damage to homes and businesses on the New Road and down Elm Grove Road and on the Exter Road.

Bertie County Emergency Management Coordinator Rickey Freeman said no deaths had been reported in the Askewville area. Sadly, that is not the case elsewhere in the county as there are now 11 confirmed deaths in the Colerain area.

Jake Dunlow, the owner of Jake’s Trailer Court where the mobile homes were located, said no one was home in any of the units that were destroyed. He said the only homes still standing in the trailer court or its surrounding area are those where residents remained during the storm.

The homes that were destroyed were scattered across a field and into neighboring yards and wooded areas.

On the New Road, damage included the destruction of some structures and one home that a roof was completely removed. The Elm Grove Road devastation included trees on homes as well as major damage to several motor vehicles.

The Exter Road had damaged homes, overturned trees and a home that had the roof partially peeled back.

Emergency officials in Bertie County said the damage was widespread in the Askewville area that there had been some damage done to emergency vehicles as officials tried to clear the roadways.

As morning light broke Sunday, there were already people beginning the process of cleaning up and attempting to find some of their missing possessions.