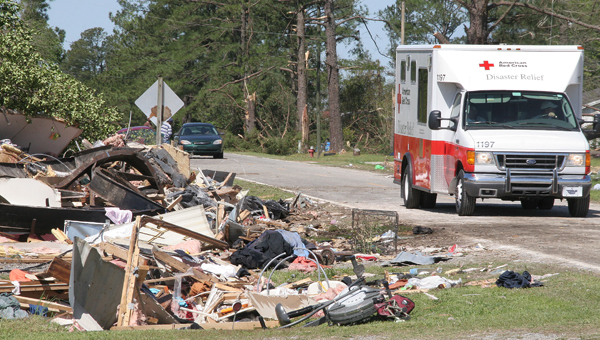 An American Red Cross Disaster Relief truck was working the Baker Road/NC 45 area of Hertford County on Sunday morning. The vehicle is shown here passing by rubble left in the aftermath of Saturday evening’s tornado. Staff Photo by Cal Bryant

HARRELLSVILLE – It was a typical late Saturday afternoon at the home of Charles and Oleathia Jones, residents of Baker Road, located just off NC 45 between Harrellsville and Colerain.

Mr. Jones was out in the yard, performing what he referred to as “man stuff.” Inside the spacious modular home, Mrs. Jones was entertaining four guests.

“I wasn’t paying anything any mind; I didn’t watch the news; I was out here working in the yard,” Mr. Jones said. “I didn’t know what it was until I noticed the railings on my porch began to move back and forth. I ran in the house and told everyone to take cover and take cover now. All I can say now, after seeing all this, is that we’re very blessed.”

“It was calm here and then, bam, it hit all of a sudden,” Mrs. Jones recalled. “My husband came in the door and said hit the floor. It was then that I could hear the sound…it was like a locomotive in my front yard. Part of our roof is gone; the bedrooms are a mess and our outbuilding in the back yard has a big hole in the top. It pretty much tore up the place.”

Inside the Jones home, furniture, fixtures and insulation covered the floor, as did shreds of broken glass.

“I guess it was the debris from across the road that the wind picked up and pelted our house,” Mrs. Jones said. “We had to duck out of the way of flying glass.”

William H. Privott, a native of Hertford County, moved back to his native soil after spending 44 years out of state. He opted for a small, brick home on Baker Road, moving there in August of last year. Fortunately, that house is still standing in the wake of Saturday’s storm.

“It sounded like a freight train coming through here. It didn’t last long but it did a lot of damage while it was here,” Privott said.

He continued, “I knew this was going to happen. I was listening to the TV news. When it started the windows started breaking; there was glass flying inside the house. We got in the hallway, away from the windows. It took about 10 to 15 minutes before we felt safe enough to get up.”

Privott said he didn’t realize the extent of the damage in his neighborhood until well after daybreak on Sunday.

“It’s a sad sight around here,” he noted, pointing to the homes of his neighbors. “The ones that aren’t a pile of rubble have been damaged; some with roofs blown off and others moved off their foundation.”

Hertford County Emergency Management Director Chris Smith said no lives were lost. He did report three injuries within the battered homes along NC 45 in the southeastern portion of the county (north of Colerain).

“We were in a search and rescue mode Saturday night; we’re now in the process of damage assessment and recovery,” Smith said.

Meanwhile, two teams of Hertford County officials were in the area Sunday morning. Their job is to document the dwellings that were totally destroyed as well as performing damage assessments on those still standing. That documentation process may take several days. It is not known at this time the actual number of homes demolished or damaged.

The southeastern portion of Hertford County – the Harrellsville area – was placed under a State of Emergency as of early Sunday morning. That action undertaken by county officials did not enact a curfew nor does it prohibit the sale of alcoholic beverages.

This frame house on West Askewville Street was among those destroyed on Saturday evening when a confirmed tornado cut a... read more