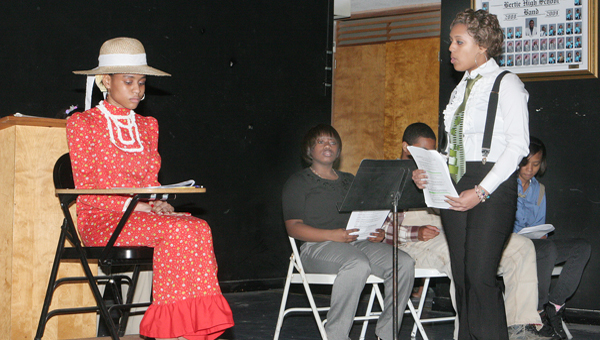 WINDSOR – It’s an example of the teaching that is turning Bertie County Schools around.

No longer are students simply sitting and listening to lectures. They’re up, active and involved in their own education.

A prime example of that type of teaching was on display Friday morning when three of Alicia Heffner’s English classes at the Bertie STEM High School were on stage performing for fellow students, staff, parents and administrators.

“To see students engaged and excited like these students is exciting to a principal,” Bertie STEM Principal G. Fisher Mitchell said. “This is what school is about. It’s not about sitting in a straight row and listening to a teacher.”

Heffner had her freshman students read Harper Lee’s famous novel “To Kill a Mockingbird” as part of their ninth grade curriculum. She said she had two plans for them when they finished the book.

The first was a thematically driven essay that analyzed the author’s theme and purpose. The essay was something students had not done before.

The second was Friday’s project, a dramatic interpretation of the courtroom scene from the book entitled “The Trial of Tom Robinson.”

“Rather than giving a multiple-choice test, it gives students the opportunity to show their knowledge by actually getting in the shoes of the characters and performing,” Heffner said.

She said that few of her students had any experience with the theater and she wanted them to have that opportunity.

“I feel that is such a tragedy,” she said. “I love the theater and remember having the opportunity to be part of performances in high school.”

Heffner found a script for the play and began working with the students for Friday’s performance. All 75 students in the three classes had a role during the three productions.

The teacher said she wasn’t concerned about the student’s ability to perform well on stage.

“This ninth grade class is amazing. They are excited about learning,” she said. “They will do anything I ask and go above expectations.”

Students began work a week ago, practicing for the performance, including spending time after school to make sure they were ready.

Heffner said her students were excited about the opportunity to present the drama.

“They are genuinely excited to do the performance and I’m excited for them,” she said. “It will be a good to showcase ninth graders who already preparing to be college-ready.”

Chastity Roulac, who took on the role of Stage Manager for the first period production, said she was excited about what she learned from “To Kill a Mockingbird” and the drama.

“I really don’t like reading unless it’s interesting,” she said. “When I read the book, and particularly the trial, I was really into it because it was exciting.”

As Stage Manager, Roulac was responsible for her class’s entire production including programs, costumes and anything else that affected the show.

“It’s a lot of responsibility, sometimes overwhelming even, but I think everything is going to go well,” she said.

Angel Prince, another student in Heffner’s first period class, said she knew what role she wanted to play as she read the book and that role – Atticus – was exactly the one she portrayed Friday.

“It was exciting because when I read the book, I saw great parts dealing with the trial,” she said. “My first thought was that I wanted to be Atticus because I had the enthusiasm.”

As for the book, Prince said she enjoyed the classic novel.

“I love it,” she said. “It showed how bad racism and segregation were in that time.”

On Friday, the classes had the opportunity to take the stage and showcase their work and it was a hit by all accounts.

“I am really proud of them,” Heffner said. “I really hope I’ll be able to use the rest of the time with this ninth grade class to get more involved with drama.

“For 99 percent of them, this is the first time they’ve done something like this and I’m incredibly proud,” she added. “There were a few hiccups, but they handled them very professionally. I couldn’t be more proud.”

Blondell and Richard Davis were in the audience for the first performance as they watched their son, Luke Davis, in his portrayal of Tom Robinson. They were part of a packed house in the school’s Little Theater.

“I thought it was amazing,” Blondell Davis said. “It brought to life the issue of prejudice. The children got the chance to see the advantage they have of living in this time.

“The children were great actors and got into their character,” Davis added. “Ms. Heffner did a great job.”

Heffner said she was thankful for the attendance for the show.

“We had so much support and I’m grateful for that,” she said. “We had parents, teachers and their students and our entire administration. I’m thankful.”

Mitchell said he was pleased with the teacher and the students and that he was especially happy with the result of the play.

“These students will never forget this book,” he said. “It is great to see students and teachers excited while they learn.”

WINDSOR – As promised, a group of Bertie County citizens have filed a lawsuit as they continue to seek all... read more