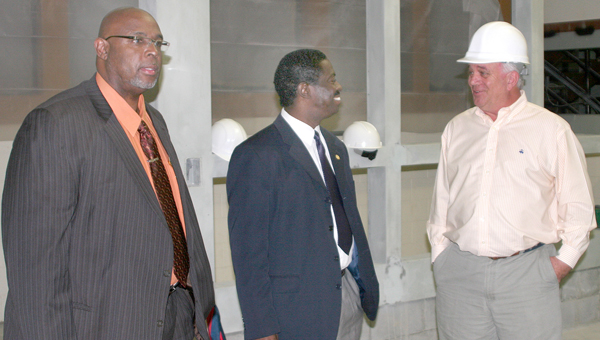 WINDSOR – A 504-bed expansion to Bertie Correctional Institute (BCI) will put more than 100 people to work.

Friday morning, BCI Administrator Renoice E. Stancil gave local members of the media a tour of the medium-security addition to the prison which is being built in large part by inmate labor.

In addition to being economical because of using the inmate labor to build the expansion, the extra beds will mean 107 new positions at Bertie Correctional, providing additional jobs for Bertie County during tough economic times.

“The new addition will help prevent over-crowding,” said Stancil, a native of Bertie County and a Class of 1981 graduate of Bertie Senior High. “There are a lot of inmates coming into the system. They are backed up in the jails and court system.”

Stancil said the medium security addition would also allow more inmates to “move through the system” from close security to medium and then eventually to minimum.

The Administrator of BCI also said because he is a native of Bertie, he is particularly pleased to see the job creation in his home county.

“One of the chief components is the job opportunities,” he said. “Bertie has always been recognized as one of the poorest counties in the state. BCI has given the county citizens more opportunities to have a job here.

Stancil and Biggs then pointed to another way of growing the local economy – the use of local vendors to provide needs for the prison, including medical, food and even water and electricity.

Biggs said the prison was already like a city. In fact, with the 1,000-bed facility that currently exists, Bertie Correctional Institute is larger than seven of the county’s eight municipalities.

Already, the prison employs 115 Bertie County residents among the 403 current employees of the facility. That number is likely to increase with the 107 new jobs.

“We’d like to see all of those jobs filled with people from Bertie County,” Biggs stressed.

“Other positions will become available as we get closer to the competition date of the project,” he said.

Those who are interested in working at the prison can call the facility at 794-8600, go to the Employment Security Commission or visit the North Carolina Department of Corrections website (www.doc.nc.gov).

Those who are hired as correctional officers start at just over $27,000 per year with no degree or experience. Those with a degree start at slightly less than $28, 500.

The 504-bed addition should be completed by October with inmates moving into that portion of the facility between December of this year and January 2012.

The ground-breaking for the original 1,000-bed close custody facility at Bertie Correctional Institute was held in May of 2004 and the ribbon was cut to officially open the facility two years later.

“The infrastructure for the addition was already built when the facility was first being constructed,” Biggs explained.

The facility has never had an escape since its opening and has kept the safety of citizens its top priority, Stancil said.

“We have never had an incident,” he said. “Our number one priority is the safety of the general public. This is a business and we take it seriously.”

As the new part of the prison is constructed, Stancil said the benefits were two-fold.

“It is a cost-savings for the state,” he said. “The state has saved millions because of the inmate labor program.

“For the inmates, they gain work experience and it gives them something to do,” he said. “They can learn a valuable trade that can assist them when they return to society.”

Inmates who work in building the expansion must be medium custody. There are between 50 and 144 working each day on the facility.

Once it is completed, Stancil said the new 504 beds should be in full use by early next year.