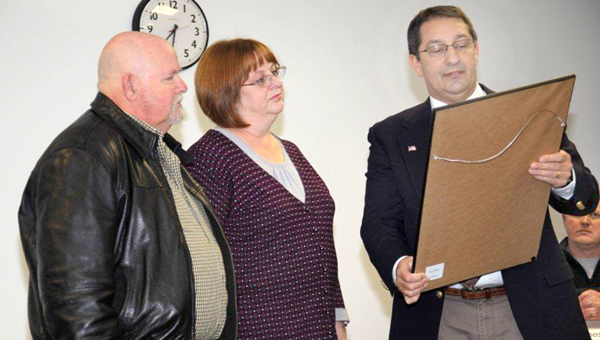 Rev. Willie McLawhorn and his wife, Dianne (left) receive a framed copy of the proclamation for Sgt. Willie Atlas McLawhorn Jr. Day. Contributed Photo by the Town of Conway

CONWAY — It’s the memory of Army Sgt. Will McLawhorn that, for many who reside here, will never be erased from their minds and hearts.

Now the very date on which the young soldier’s life was claimed will be set aside as a time of honor and remembrance for the town of Conway.

The Conway Board of Commissioners proclaimed December 12 as Sgt. Willie Atlas McLawhorn Jr. Day. McLawhorn, along with five of his comrades, was killed while serving in the Kandahar Province of Afghanistan.

The Conway Board of Commissioners adopted the proclamation on Feb. 1. Simultaneously, Conway Mayor Brian Bolton presented the Rev. Willie McLawhorn and his wife, Dianne, with a framed copy of the measure.

For the McLawhorns it was a meaningful gesture by the town to honor their son’s life.

“We’re pleased because a proclamation will remember him from now to eternity. That was special to us,” said Rev. McLawhorn. “The outpouring of love at that time and then for them to do that just topped it off.”

The proclamation notes the 23-year-old was raised in Conway after his family relocated from Whiteville. McLawhorn was a 2005 graduate of Northeast Academy and “touched the lives of countless people through his zest for life,” the document states.

“The Conway Board of Commissioners expresses its profound appreciation and sincere condolences to the family of Sgt. Willie Atlas McLawhorn Jr. for his honorable service, steadfast courage and supreme sacrifice in defending his country and our freedom,” the proclamation reads.

“We’ve researched it and to the best of our knowledge, Will was the first Conway citizen to be lost in action (during a war),” he said. “That, and the fact he was raised in Conway, we felt we needed to do something.”

Bolton said the mood within the community was somber after McLawhorn’s passing and really brought the reality of the war home to Conway citizens.

“It hit the community very hard,” he said. “It actually showed people in this small town the sacrifice that is happening every day.”

Officials felt the need to keep the adoption proclamation quiet for a time out of respect for the McLawhorn family.

As for any activities to be held that day, Bolton said that will be left up to the McLawhorns. He added the Conway Veterans’ Park, where a brick bears Will’s name, is open to family and friends.

“We wanted to open it up to the family to use as a place of remembrance,” Bolton said.

Rev. McLawhorn said the specifics have not been discussed, but he imagines there will be something special to mark the day.

(Thadd White contributed to this article)