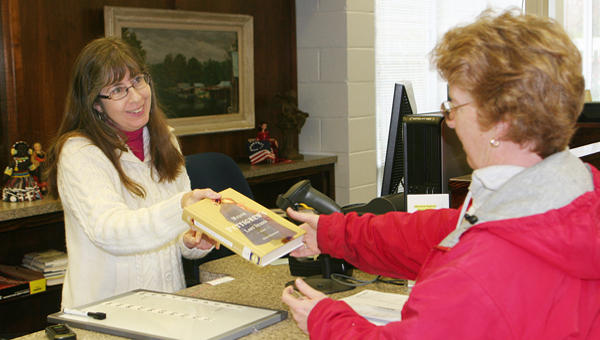 WINDSOR – Walking through the doors of Lawrence Memorial Library could cause patrons a tough time believing what the inside of the building looked like just months ago.

Along with the smiles of Nancy Hughes, Lillian Harden and Marie Maryon, patrons are greeted by a facility sparkling with the newness of life. It’s a far cry from the devastation that affected the Windsor-based library following the remnants of Tropical Storm Nicole in October of last year.

“Everyone who walks in says they’re so glad we’re open,” said Hughes, who serves as the Library Branch Manager. “Things have been going well.”

Such was the destruction of the facility due to flood waters that even the Circulation Desk had to be removed. That piece of furniture was built so well it took a sledge hammer to remove it.

“We all had a good cry on that day,” said Maryon. “That’s where we all worked and we were so sad to see it go.”

The only thing that was salvaged in the building were the shelves, which were cleaned and also shine like they’re new.

Hughes said the patrons of the library were glad to be back in the facility, but she thought the staff may be even happier.

“Lillian said we are the three happiest women in Windsor,” Hughes mused. “It feels good to be back serving our patrons.”

Maryon said the bright smiles and the wonderful look of the new facility was good to see, especially after the way the building looked after the flood water receded.

“I took a photo of a book on tape lying on the floor that was called “No Defense” and that’s exactly how we felt,” she said. “

The rejuvenated facility has already attracted an abundance of people as they get back into the daily routine. In addition to those who were already using the library, the staff has signed up 20 new patrons in less than two weeks.

“I think people appreciate us and missed us,” Hughes said. “It is also good to see new people using the library.”

Lawrence Memorial Library is open Monday, Tuesday, Wednesday and Friday from 10 a.m. until 6 p.m. The facility’s hours for Thursday are 10 a.m. until 8 p.m. Saturday hours are 9 a.m. until 12 noon.

“We welcome everyone back and encourage them to come see us,” Hughes said. “The library looks great and we’re ready to be a service to the community again. We missed our friends who came here regularly and it’s good to be back.”

More bang for the buck

WINDSOR – Dues paid to the Mid-East Commission are well spent. The Bertie County Board of Commissioners found out just... read more