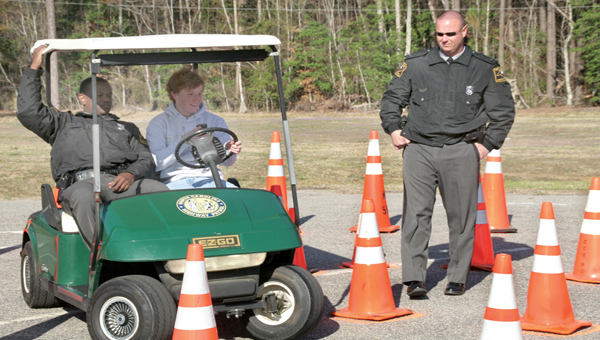 A student at Ridgecroft School tries his hand at steering a golf cart inside the cones while sending a text message. Along for the ride is Highway Patrol Trooper J.O. Walter while NCHP Sgt. Mike Warren observes the Tuesday morning drill. Staff Photo by Cal Bryant

That was the message sent here Tuesday morning by the North Carolina Highway Patrol as officers conducted its “Texting While Driving” program at Ridgecroft School. There, the older students (those licensed to drive) operated a golf cart through a course marked by orange cones. Students divided into teams of two, one operating the cart while the other sends a text message for their partner to read. Once the message is sent, the driver is required to read it out loud to the Highway Patrol Trooper riding with the student and then respond to the message.

The end result, as expected, was numerous cones knocked from their spots.

“We want you laugh, have a good time today, but in the end this all proves a point,” said Sgt. Mike Warren of the Highway Patrol’s Troop A, District II office in Ahoskie.

He continued, “The point of this is to remind you that not only is texting illegal by all drivers, it’s also deadly. This program is designed to make you understand that even the slightest contact with one of these cones proves the point that you are distracted while operating the cart.

“What we are finding is that when you are distracted and run off the road to the right, inexperience (as a driver) will cause you to panic and snatch the wheel in an effort to re-enter the lane of travel rather than easing your vehicle back onto the roadway,” Sgt. Warren added. “In so many of those type cases, your vehicle goes into a spin, you hit the ditch or woods, the vehicle overturns and you’re injured, or in worse case scenarios, lives are lost.”

Sgt. Warren also reminded the students that were under age 18 and licensed to drive that they are prohibited, by law, of using a cell phone for any reason while operating a motor vehicle.

“Running off the road and overcorrecting is the main reason for the majority of accidents caused by distracted driving,” noted NCHP Trooper Jeff Collins who serves Troop A, headquartered in Greenville, as the Traffic Safety Coordinator.

“We’ll wind up hitting cones today, all in fun, but the point we want to make is getting these students to think of hitting something at 55 miles per hour,” Collins added. “Once your vehicle is out of control, that’s it, you’re basically helpless from that point.”

Studies have shown that a teen can create and send a text message in 10 to 15 seconds. Driving 60 miles per hour covers more than 80 feet per second; one text could equal a tenth of a mile that a driver is not paying attention to their driving.

Even though texting is now illegal while driving, the troopers suggested that if a driver receives a message or wants to send one, pull the vehicle out of the lane of travel, come to a stop and read or send the message.

“We want to publically thank Ridgecroft School as well as our other local schools for being receptive to us and allowing the Highway Patrol to present these important programs,” said First Sgt. Todd Lane of the Ahoskie NCHP office.

“Within the communities we serve, we are dedicated to making sure that the first contact between a young driver and a state trooper is not at the scene of an accident or at a traffic checkpoint,” Lane continued. “We prefer this environment at our local schools in an effort to enhance the knowledge of our young drivers in regards to motor vehicle safety.

“We could not put on these programs without the support of our local schools and local fire departments which provide resources such as the cones and personnel. The goal is to ensure the safety of our children as they become young drivers on the highways of our local counties,” Lane concluded.

Many collisions involving teenage drivers occur during their commute to and from high school.

Since Jan. 1, 2005, over 600 teenagers have lost their lives on the highways and public vehicular areas of North Carolina.