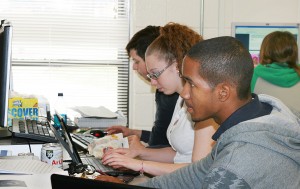 They have been successful all over North Carolina, including two in the Roanoke-Chowan area.

The NCNSP indicated that the data collected over the first three years of the schools existence had provided they are succeeding in reducing dropout rates and in boosting test scores.

“The state’s new STEM schools are on the leading edge of a shift in education in North Carolina and nationwide that raises the importance of mastering math and science skills not just for the few, but for the many,” said NCNSP President Tony Habit.

Students at the STEM schools are doing extremely well compared to students in other schools throughout North Carolina. Some statistics that show the success of STEM school include:

* Percentage of students taking Algebra II: 17.9 percent in all high schools; 30.6 percent of STEM; and

“The students that we have get off the same buses as the regular high school students,” he said. “Students will live up to the expectations you set for them. These students will study twice as much and their teachers will stay two to three hours longer.

“We have a culture of high expectations,” he added. “That’s the bottom line.”

When asked if he was surprised by the success of STEM Schools, Mitchell said “yes and no.”

“We’re dealing with the same students who were not doing well in the regular high school,” he said. “You can’t assume they were going to do well.

“On the other hand, I’m not surprised because the New Schools Project had studied, researched and planned to come up with a great format for the school,” he said. “They have done a good job of providing professional development, coaches and anything else we needed for the students to be successful.”

Mitchell said many people believe students in the northeastern part of North Carolina can’t be as successful as those in the Triad and Triangle, but STEM Schools are proving that notion wrong.

Felisha Wyche, who took over as Principal at the Northampton-West STEM High School approximately a year and a half ago, said her school had improved because of concentrating on the design principals of a STEM School.

Wyche said teachers were working from bell to bell and were doing a better job of knowing students and keeping in touch with them.

The New Schools Project has plans now to use the $400 million federal Race to the Top grant to develop networks of STEM schools oriented to four distinct career themes: health and life sciences, energy and sustainability, biotechnology and agriscience and aerospace.

The schools will serve every region in the state and will benefit from a number of partners, including The Science House at N.C. State University, Core-Plus Mathematics and the Teaching Institute for Excellence in STEM.

The original nine campuses will graduate their first class in 2011. They were opened on existing high school campuses that a judge had threatened to close because of far-reaching academic failure.

All of the schools have offered new opportunities to students with limited means and resources and all have above-average poverty level.”

Mitchell said the STEM School in Bertie County had been successful because of teachers.

“Teachers have really made the difference,” he said. “We have been fortunate in that we have been able to get teachers who are passionate about what they are doing.”

The principal said his school had sometimes been criticized because of the teacher turnover rate, but that it had been helpful more often than not – specifically citing the use of Teach for America teachers who commit to only two years, but who have made the school successful.

“The other big difference has been the students themselves,” he said. “Success breeds success and once a student achieves success, they don’t want to go back to not being successful.”

Mitchell said the students wanted to be successful so much that he had seen a student cry for scoring a three (proficient) on an End of Course test because they wanted to score a level four.

“High expectations make a difference,” he said. “Having them and sticking with them consistently has been a key for us.”

“We have a dynamic teaching staff,” she said. “We would not have made the progress we have without the dedication and perseverance of our teachers.”

The historic Gates County Courthouse (circa 1836) is in need of repairs and an effort is underway among local leaders... read more