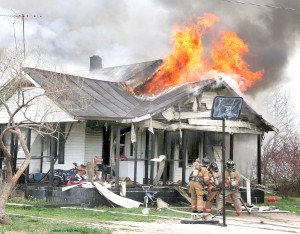 AHOSKIE – The high-pitch squeal of a smoke detector did its job here Wednesday afternoon, alerting two children to flee their burning home.

The blaze left a residence at 304 Bonner’s Bridge Road southwest of Ahoskie in total ruin, according to Ahoskie Rural Fire Department Chief Michael Bradley. He said the call came in at 1:01 p.m. and upon arrival of the first unit, the home was totally engulfed in flames.

“A passer-by called it in,” Chief Bradley said. “We learned after we arrived on scene that two children were asleep inside the residence, but the smoke detector woke them up and they were able to get out of the house unharmed.”

Ahoskie Rural, which sent four units and 10 men to the scene, was assisted by the Millennium Volunteer Fire Department (two units; eight men).

“The fire’s origin is undetermined at this time, but we are leaning towards it being electrical in nature,” Chief Bradley stated.

Bradley said the home was owned by Billy Mitchell of Ahoskie and rented to Raymond Vinson. He added that, to his knowledge, only the two children – ages 13 and 5 – were at the residence at the time of the fire.

The Ahoskie Rural units remained on the scene for just over two hours, returning to the station at 3:17 p.m.