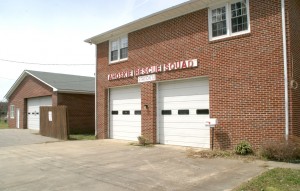 WINTON – A measure was approved here Monday night that will lead to Hertford County EMS (Emergency Medical Services) housing one of its rescue units and crew at the old Ahoskie Rescue Squad building.

The Hertford County Board of Commissioners approved paying a $1 annual lease on the building, paving the way for EMS to open a substation at that location.

Hertford County Manager Loria Williams said she, Ahoskie Town Manager Tony Hammond and Chuck Revelle, legal counsel to the commissioners, had looked over the proposed contract and are in agreement with the way it was written, pending a few modifications. She suggested that after the commissioners had reviewed the contract, they need to authorize her to execute the document.

“We have talked about this process for some time,” Williams said. “James (Broglin, Hertford County’s Emergency Services Director), myself and Mr. Hammond looked at the building. The Town of Ahoskie agreed to lease it to us for one dollar per year. The county would be responsible for everything else.”

Williams mentioned the indemnity clauses in the contact, relating to liability issues.

“The building will require some upfitting and we will look to put those costs into our upcoming budget planning process,” Williams noted. “The building is large enough where we hope to also use it to store some Board of Elections equipment, getting those items into a more climate-controlled environment.”

By utilizing the building as a substation for Hertford County EMS, much like was done with a town-owned facility in Murfreesboro, Williams said the deal allows the county to house a rescue squad unit and crew in Ahoskie, an area of the county that experiences the highest volume of rescue related calls.

“Our crew can enjoy the full use of that building,” she said. “Right now, we’ve been graciously given the opportunity to work out of the Town of Ahoskie’s fire department. Those quarters are very small, very limited. Hopefully this deal will lead to a long-term relationship in the Ahoskie area.”

Commission Vice-Chair Curtis Freeman asked for clarification, noting Ahoskie citizens need to be aware that the rescue squad unit and crew housed in the building were not there for the sole purpose of answering calls in Ahoskie and the Ahoskie area.

“This is not the Ahoskie Rescue Squad,” Freeman stressed.

“We do not operate a district-like service,” Williams responded. “That truck will roll to Como if it has to when a call comes in. Yes, our high volume (of EMS calls) is in the Ahoskie area, but again I must stress we do not operate in a district format. This will be a substation of Station 19 (the EMS headquarters near Winton), not a district operation.”

“I just didn’t want the town of Ahoskie citizens expecting that truck will be there 24/7 and when it’s answering a call in another area of the county ask where’s our truck,” Freeman stated. “This truck belongs to the whole county. It might respond to Como, or Murfreesboro, or Harrellsville, wherever the need is.”

“This truck will have a home in Ahoskie,” Williams said, “but answer calls countywide.”

Revelle pointed out a provision within the contract that called for Hertford County to receive permission from the Town of Ahoskie prior to making any structural alterations or improvements to the building.

Commissioner Ronald Gatling made the motion to approve the lease agreement, with modifications, between the county and the Town of Ahoskie and to allow Williams to execute the document. Freeman offered a second and the measure was approved without objection.

The Town of Ahoskie came into ownership of the building after it was deeded to them following the closing of the Ahoskie Rescue Squad in 2008. That squad served the town and area for 50 years.

WINTON – A prison guard found himself on the other side of the bars here last week. Eric Lashawn Askew,... read more