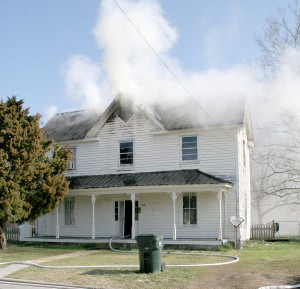 It appeared the worst of a Friday morning fire in Ahoskie was contained to the second floor of this residence located on North Street. Staff Photo by Cal Bryant

AHOSKIE – An apparent electrical mishap is reportedly the cause of a Friday morning fire here that severely damaged the attic area of a residence.

Heavy smoke poured from the attic of a two-story framed house located at 716 North Street, one block north of the Ahoskie Fire Department.

Once inside the dwelling, firemen answering the call, which came in shortly after 10 a.m., concentrated their efforts to the second floor and attic area.

“The homeowner (Allison F. Austin) said work was being done to turn the attic into a room,” Ahoskie Fire Chief Ken Dilday said. “They had plugged an electric heater and light into an extension cord. Those working up there had left for a short period of time and upon returning found the house on fire.”

Dilday said he believed the fire was caused by either the extension cord becoming overheated or the heater may have tipped over, either causing the attic’s insulation to ignite.

“Whichever the case, it was unintentional,” Dilday said.

Dilday said the blaze burned the entire attic, but was contained to that part of the home. There was some water damage to the second floor while the ground floor suffered very little or no damage, Dilday said.

“We pulled the (home’s electric) meter, so it’s unlivable as of right now,” Dilday said. “We directed the homeowner to the American Red Cross for housing assistance.”

The Ahoskie Fire Department responded with 11 men, two engines and one equipment truck. Streets in the adjacent area were blocked off in order to give the firefighters room to work.

WINDSOR – A complaint about noise from Liverman’s Metal Recycling has been heard by the Bertie County Commissioners. Monday morning,... read more