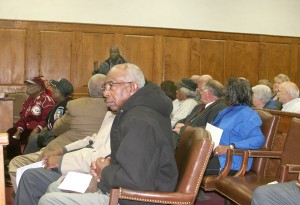 Monday’s meeting of the Bertie County Board of Commissioners was moved to the courtroom in order to accommodate a large crowd, some of whom addressed their elected leaders over a $42,000 annual raise given to County Manager Zee Lamb. Staff Photo by Thadd White

During their regular meeting, the board heard from nearly a dozen of the approximately 80 people who attended the meeting. Most of those who spoke did so to oppose the salary increase given to Bertie County Manager Zee Lamb in August of 2009.

Several of the citizens spoke concerning the 14-page statement released by the commissioners explaining why the board chose to increase Lamb’s salary and travel allowance by approximately 46 percent 18 months ago.

The first person to speak was Ron Wesson. He said that it was his third time addressing the board and said no citizen looked forward to the task.

“I ask this body to vote to retract that increase,” Wesson said of the salary raise for the county manager.

He said the 14-page response by the board gave Lamb credit for everything that happened in Bertie County during his tenure. Wesson also said he believes Lamb does a good job.

“A good job does not warrant an increase of 46 percent,” he said.

Wesson also said the board was not transparent in their dealings with the public.

“You did this in the shadows rather than the full light of day,” he said. “That is appalling.”

Wesson said that many of the commissioners had told citizens privately they regret giving the raise and asked them to do that publicly and rescind the salary increase.

Williams also said he believed the county manager and county attorney should be kept separately and disagreed with the board’s use of Lamb’s legal expertise.

As for the collection of delinquent property taxes, Williams said Lamb should have been doing that.

“That is part of his job,” Williams stressed.

In closing, Williams asked the public to read the report.

Lewiston Woodville Commissioner Martha Thompson then spoke and made a request of the board.

“You have dug a hole and put yourself in it,” she told the board.

Thompson asked for the records of conversation between the board and Lamb when he was first made county manager.

Fin Rascoe asked the board the status of a request for records of the closed session when the board discussed Lamb’s raise. Commission Chairman L.C. Hoggard III said that was a legal matter and that he would have to defer to Lloyd Smith, who was not at the meeting.

The next person to speak was Tim Phelps, who was speaking for the third time about the issue and who suggested the board was hoping citizens would not be back at the meeting.

“I think it’s going to get worse and not better,” he said.

Phelps said he knew board members were having trouble visiting grocery stores and gas stations without having to hear from citizens. He also suggested the board members had individually expressed regret for making the decision to grant the raise and suggested they do it publicly.

Chairman Hoggard said he would like to make it clear that he did go to grocery stores and filling stations and that he would continue to do so.

“As a public official I talk to people all the time,” he said. “What I say to them compared to what they say I said, I don’t know.”

John Lassiter spoke and said he was concerned about the amount of power Lamb had in the county and said for the second time in as many meetings that he was opposed to the increase.

Garry Terry spoke to the board for the third time about the issue.

“I urge the board to listen to the concerns of those that elected you,” Terry said.

He also suggested the election of 2010 may have been different had the citizens known about the salary increase.

The final person to speak in the first set of public comments was David Waters who offered to do the county manager’s job for two years for $1 per year if the board would remove Lamb.

The board then went into the heart of their agenda before going back to public comments at the end of the meeting. Nearly half of those who gathered for the meeting left before the second set of public comments.

In the second session of public comment, Merrill Waters spoke and said Lamb had been very helpful to him, but also suggested the salary increase was unreasonable.

“This issue is not going to go away,” he said.

The final person to speak at the meeting was Jacques Turner, who said he had read the 14-page statement and had many questions.

Turner said he had employees who worked for him, but had never given one of them a 46 percent raise.

Turner suggested that Commissioner Charles Smith had gone above and beyond his duty while serving in administration at Bertie High School and that Commissioner J. Wallace Perry had done the same during his years of service with the sheriff’s department. He said he was sure neither had received a merit raise the size of Lamb’s increase.

“I don’t see anything in these 14 pages of reading that he went above and beyond,” Turner said.