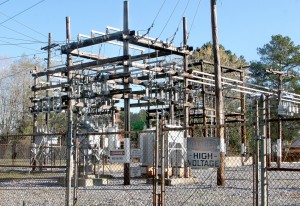 The Town of Windsor uses this substation to divert electrical power to its residential and commercial customers after purchasing the energy source from Dominion Power. Staff Photo by Thadd White

The Windsor Board of Commissioners adopted a resolution opposing House Bill 117, which they believe could have a negative impact on the town’s finances.

House Bill 117 would prevent Windsor and all other municipality-owned electric systems from transferring funds from the electric system to any other fund operated by the town. The proposed legislation is being sponsored by William L. Wainwright, a Democrat representing Craven and Lenoir counties, and Rep. Leo Daughtry, a Republican from Johnston County.

Windsor Town Administrator Allen Castelloe said the bill was supposed to be discussed by the House Public Utilities Committee last week, but the discussion had been postponed.

“They are scheduled to review it next Wednesday,” Castelloe said.

Windsor Mayor Jimmy Hoggard said the bill was one that would make life difficult for the town.

“It is a most restrictive bill,” the mayor insisted. “It would hamstring us.”

Mayor Hoggard said once he and Castelloe learned of the bill, they made telephone calls to members of the House committee that would review it. He said most of the calls were well-received and that he believed the town does have support for its position.

Commissioner Joe Alexander then asked if the bill would be defeated. Hoggard said he wasn’t sure.

“Bills like this have been defeated in the past, but the Republicans are looking at everything,” the mayor said.

Overton said  there are other public utilities that have high debts and many of them have caused citizens to question high rates and transfers of money. He said, however, that had no bearing on the town of Windsor.

“We don’t owe anything,” Mayor Hoggard said. “That doesn’t affect us at all.”

The board unanimously adopted the resolution opposing House Bill 117.