Change is on the way 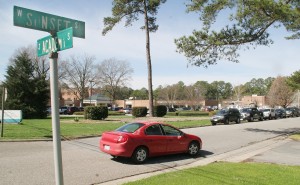 Sunset Street near Roanoke-Chowan Hospital will be one of the Ahoskie thoroughfares affected by traffic flow and parking changes approved Tuesday by the Ahoskie Town Council. Staff Photo by Cal Bryant

AHOSKIE – Two years after launching a study that would hopefully improve traffic flow and parking issues in the southwest area of town, especially at and near Roanoke-Chowan Hospital, members of the Ahoskie Town Council have approved a plan aimed at improving those problems.

At their March 8 meeting, Council members unanimously approved Alternative #1 of a three-option plan. That new plan prohibits parking on the north side of streets running east to west and the west side of north-south streets as well as other modifications. Signage and pavement markings will make motorists aware of the changes.

Alternative number two changed some of the streets to one-way.

“That idea was not very popular with the study group, with the residents in that area of town and with the Council members,” Ahoskie Town Manager Tony Hammond said.

There was consideration given to turn Sunset Street (west of Academy) to one-way. However, that was not a part of the approved plan. However, the Council did approve to prohibit parking on both sides of Sunset from Academy west to Curtis Street.

As part of the change, Council members also voted to restrict parking within six feet of a driveway in the areas noted above. By implementing that plan, motorists traveling out of a driveway to access the street will enjoy improved visibility.

A public hearing, as advertised, was held at Tuesday’s meeting concerning the changes. No one spoke in favor or opposition of the proposal. The public hearing was necessary due to the changes that would impact the current wording of the town’s ordinance in regards to street-side parking.

The proposal dates back to March of 2009 where Council ordered a traffic study of all Ahoskie streets. Four months later, Mark Freeman of Gibson Engineers provided his review of the traffic flow/parking issues and suggested a more in-depth study. That included the formation of a study group consisting of town officials. They met with residents living in the southwestern portion of town as well as with officials with the Ahoskie Police Department and Ahoskie Fire Department who voiced concerns about emergency access to homes in the study area. Roanoke-Chowan Hospital was also represented at each meeting of the study group.

One of the downsides to prohibiting parking on one side of the streets is it eliminates 144 parking spaces currently in use or available for use. However, a recent move by hospital officials will cut that parking deficit in half. They have opened up a portion of their valet parking lot to hospital staff as well as paving a smaller area that will allow for additional parking.

In his presentation to Council at their February meeting, Freeman said one of the biggest concerns were narrow streets. He said the general rule of thumb for parked cars is that they take up about eight feet (width) of space. If parking is allowed on both sides of a street, then that consumes 16 feet of the pavement. If the same rule applies to moving vehicles (each needing eight feet of space) and two vehicles are traveling on the same street in opposite directions (taking into account vehicles parked on both sides), then the minimum street width is 32 feet.

“If you have a street less than 32 feet wide, and there are some in Ahoskie, it’s very difficult to have parking on both sides and have two-way traffic in the middle,” Freeman said. “It’s a case now when vehicles are meeting each other on those narrow streets, one stops and allows the other to come by. There’s just no room for two cars to meet.”

It’s on those narrow streets where Freeman suggested that parking be limited to one side. By implementing that measure it gives the plan some uniformity and eliminates guesswork on the part of the driver.

Meanwhile, the town’s current ordinance prohibiting parking within 15 feet of an intersection will remain as written.

‘We’ve got to give it time’

JACKSON — The notion of consolidating Northampton County’s two high schools is at a stand still for now. On Monday... read more