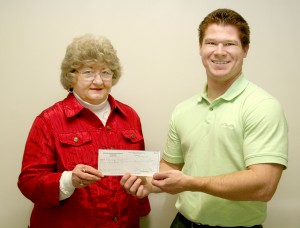 Nancy Godwin of Ahoskie was the winner of the 2011 “Find Brian’s Booty” contest, part of this year’s annual Crossroads edition published by the Roanoke-Chowan News-Herald and Gates County Index. Shown making the $500 presentation is the namesake of the contest, News-Herald Advertising Director Brian Pavlick. Staff Photo by Cal Bryant

AHOSKIE – Nancy Godwin knew the location as soon as she saw the first piece of the puzzle.

For her efforts, the Ahoskie woman is $500 richer today.

The second annual “Find Brian’s Booty” contest officially concluded on Tuesday afternoon with a drawing of all the correct responses to a four-week photo puzzle that was part of “Crossroads – 2011” – a yearly special edition written and published by Roanoke-Chowan Publications.

This year’s contest directed participants to piece together four parts of a single photo and guess its subject matter. A different section of that photo was published for four consecutive weeks of “Crossroads – 2011.”

The photo, taken in 1938, shows the construction of the bridge spanning the railroad tracks in Ahoskie that today is part of Memorial Drive (US 13). Most local motorists refer to the bridge as the overhead pass.

Seven-seventy individuals participated in the contest. Of that number, 51 entered correct answers, including Godwin.

“I knew what it was when I saw the first piece of the puzzle,” Godwin said after collecting her $500 prize on Wednesday.

Godwin entered three times, each with the correct response.

She plans to use the money to enjoy some shopping and also donate to her church, Oak Grove Baptist.

“It might take all of it just to fill my car up with gas,” she chuckled, referencing the skyrocketing prices at the pump.

Each of the 51 correct responses were placed together from where one was randomly selected as the winner.

MURFREESBORO – Sometime you go small, and then sometimes you have to ‘super-size.’ That could describe the doubleheader softball sweep... read more