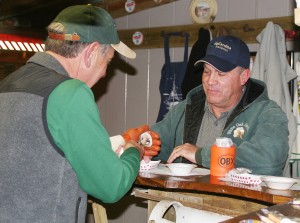 Lee Stokes (left) shucks a steamed oyster for Reggie Askew, one of the numerous ticket holders attending a March 4 fundraiser to benefit the Gates Emergency Ministries Food Pantry. The fundraiser was held at the A&W Outback near Eure. Staff Photo by Cal Bryant

EURE – If you left A&W Outback here Friday night with an empty stomach, it wasn’t the fault of those responsible for organizing a fundraiser for GEMS (Gates Emergency Ministries).

Twelve bushels of oysters were steamed to perfection; 70 pounds of shrimp were gobbled up and two, five gallon pots of homemade clam chowder provided just the right amount of warmth on a cool, early March night.

However, the real winners were not those who paid $25 a ticket for the delicious all-you-can-eat meal – which included hamburgers, hot dogs and homemade chili for the non-seafood lovers – but rather those who are in need during these tough economic times.

The brainchild of Ann and Wade Askew (the A and W in A&W Outback), the event generated nearly $2,500 in cash plus a pick-up truck load of food for the GEMS operated pantry in Gatesville.

“This fundraiser was something Ann and I talked about last October when we went to the open house hosted by GEMS,” said Wade Askew, a former Gates County Commissioner. “We saw then the need they had; their shelves were empty last October and when we took the food items there on Saturday that we collected Friday night, the shelves were still basically empty.

“I hope what we did will help GEMS and help the good people of Gates County who find themselves a bit down on their luck right now in this weakened economy,” he continued. “So many of our citizens here in the county are out of work right now and are in need of our help.”

“For Wade and Ann to take on a project of this nature was tremendous; we’re really thankful and blessed for what they did and for the many sponsors and individuals that made contributions,” said Vanessa Truman, a GEMS volunteer. “Because we operate on a day-to-day basis, donations of money and food such as was the case with Friday’s fundraiser will go a long way in helping us provide for those in need within Gates County.”

Truman said the money raised will all be used towards the purchase of food, either from the Food Bank of the Albemarle or from local retail outlets.

The Askews said the event would not have been possible without the assistance of a long list of sponsors. Their monetary contributions paid for the food served on Friday night, meaning the price paid per ticket all went to GEMS. Each ticket holder was also encouraged to bring at least two items of non-perishable food to help re-stock the GEMS shelves.

“Our sponsors were such a big part of what we wanted to do here,” Wade Askew said. “We, on behalf of GEMS, really appreciate their help. Others gave donations as well.”

“We wouldn’t have been able to do this without our families, the Askews and the Stokes, they pitched in and helped out wherever they were needed,” Ann Askew said.

Joe Greene donated two of his handmade squirrel feeders as door prizes. They were won by Jackie Bundy and Karen Utt.

The Askews are considering making the event an annual fundraiser for GEMS.

“It’s different because it’s an oyster roast in late winter when people are looking for something to do,” Ann Askew said. “I think that for a first-time event, things went really well. The crowd (split into two serving times: 5-7:30 p.m. and 7:30-10 p.m.) flowed smoothly and everyone seemed to have a real good time.”

GEMS is seeing more and more individuals coming to them for assistance. In July of 2009, the organization assisted 116 people. Just over one year later that number exceeded 200.

Truman noted that 189 individuals (73 families) were assisted in February of this year.

“And that’s a short month,” she noted.

In an effort to keep pace with the growing demand, GEMS volunteers make weekly trips to local stores to purchase food items with money donated to the organization. In some cases, those volunteers reach deep inside their pockets to come up with the money needed to make those purchases.

Those thinking of donating to GEMS are reminded that the food products do not necessarily have to be of the store-bought variety. Gatesville Methodist Church has a community garden every year and has donated a lot of food to GEMS. Other individuals have donated from their gardens as well.

GEMS also distributes meats – beef, chicken, pork – but those items must be pre-packaged. They are kept in a small freezer at the GEMS office.

GEMS, in existence for 20-plus years, is an all volunteer organization under the direction of a board of directors. The organization is always in need of food products, monetary donations and volunteers.

A typical late-winter weather scenario – a strong cold front clashing with warm, moist air – has the potential to... read more