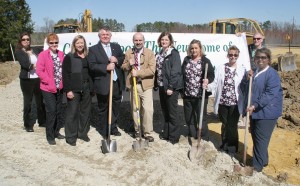 Citing a need to expand due to his growing list of patients, Dr. Simon Khoury is having a new office constructed near the intersection of NC 11 and Holloman Road, just north of Millennium in Hertford County. The current practice is located in Aulander at 108 South Commerce Street.

“We want to provide the best facilities for our patients and our staff, that’s why we decided to build this new office,” Dr. Khoury said. “Plus we had a need to expand the area where we keep our medical records; those files are growing due to our practice seeing more and more patients. Plain and simple, we just need more room.”

“We will update our equipment with this new office,” he noted. “I think it’s a compliment to the services we provide our patients that we needed to grow and expand our practice. Again, I can’t stress enough that our medical practice isn’t about me or my staff, it’s about our patients, those we serve. I want to thank those patients for sticking with us while we were in our small clinic. I think they’ll be real happy once they see the expanded space we’ll have with this new office.”

That new, single-story office will encompass 4,500 square feet. Bob Rowe Construction is serving as the general contractor. Rowe said the construction project is expected to be completed in 8-to-10 months.

Dr. Khoury came to the local area in 1996, working at that time with longtime Aulander physician Dr. Fred Saunders. Dr. Saunders, who began his medical practice in 1946, retired shortly thereafter, although he remained as a mentor and close ally for Khoury until 2004. Dr. Khoury began his private practice one year later.