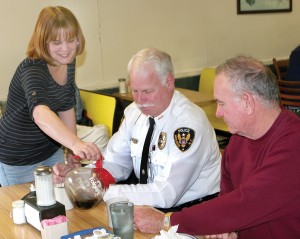 WINDSOR – It isn’t easy getting up early and being at work before the sun rises many mornings.

Still, that’s the chosen career of April Mizelle, who spends each morning as a waitress at Carolina Country Restaurant in Windsor.

“Getting up early is definitely the hardest part,” she said. “Everything else I can handle, but I never enjoy getting up early. When the alarm goes off, I usually want to throw it across the room.”

Upon arrival each morning, she begins making sure napkin holders are filled, salt and pepper are in place and all the other daily routines of making sure customers have what they need for breakfast.

Soon after, customers begin arriving. As the only waitress at the restaurant in the mornings, Mizelle said most of those customers are ones she knows well.

She said getting to know those who make coming to the restaurant part of their daily routine is one of the best parts of the job.

In fact, she said talking with her customers is the best part of what she does every day.

“I love getting to know them and talking to them when they come in,” Mizelle insisted.

While the most of her work involves taking care of the needs of each customer whether by taking orders, bringing food or providing refills, Mizelle is also responsible for keeping tables clean, helping prepare for the next shift and even the occasional time of helping out in the kitchen.

In addition, she is answering the telephone, operating the cash register for those who are finished and trying her best to keep each of the customers happy.

All of this happens every  day, no matter what the weather is like outside.

“I come to work regardless,” she said. “Like everyone else, I have bills to pay so if the weather’s bad, I’m still here whether someone has to bring me or Billy (Dunlow, the owner of the restaurant) has to come get me.”

She has been working at Carolina Country for nine years, beginning with a night shift and then eventually moving to her preferred spot in the mornings.

“I like working the morning shift better,” she said. “You have to get up early, but it means your work is done earlier in the day and you can do whatever you need to after.”

Waiting on more than 100 customers each morning can be challenging, especially during times when the restaurant is packed, but it is something Mizelle said she still enjoys doing. That time is usually between 8 and 9 a.m., according to Mizelle.

“The customers make it enjoyable,” she said. “Even if the place is full, it’s still enjoyable.”

Asked how she handles so many people at once, she said “you just do it.”

“Most of the customers understand because they know I’m here by myself,” she added. “You just have to take  one table at a time.”

She said that some of the regular customers even help out.

“Some of them get up and do things themselves if it gets really busy,” she laughed. “My customers are the best.”

Amongst the regulars is four-year-old Maizy Dunn, who Mizelle refers to as “Cheese Biscuit.” She said she loves working with the customers and especially youngsters like Dunn, who make her smile.

“She’s such a sweetheart,” Mizelle said.

In addition to the customers, Mizelle said she also enjoys working with the others who are employed at Carolina Country.

“I love everybody that works here,” she said. “Mainly it’s me and Paul (the cook), but I love all the folks I work with here.”

Mizelle said her slowest part of the day is usually when the business first opens each morning. She said at that time she gets to spend more time talking with the customers.

She said she enjoys that time of the day as much as any.

The job has its tough spots – such as getting up before daylight – but, it is the people she works with and the customers who make Carolina Country part of their life that makes Mizelle happy with what she does.

“I look forward to coming to work because I look forward to seeing everyone,” she said. “I can pretty much count on seeing a lot of people every day. That really makes coming here enjoyable.”

The following statement was released by the Bertie County Board of Commissioners Monday night in reference to the salary increase... read more