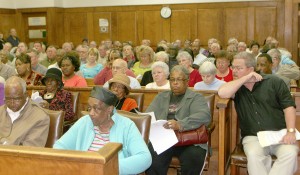 A group of citizens from Bertie County came to the Monday night’s meeting of the Bertie County Commissioners. Nearly a dozen people spoke during public input, many expressing dissatisfaction with a raise given to County Manager Zee Lamb. Staff Photo by Thadd White

The regular meeting of the board, which was moved to the Bertie County District Court room to accommodate the size of the audience, had just two agenda items – public comment and commissioner comments.

During public input, nearly a dozen people spoke to the board, many about the $42,275 salary increase granted to Bertie County Manager Zee Lamb in September of 2009.

At the opening of the meeting, Bertie County Commission Chairman L.C. Hoggard III said the citizens would be given a chance to speak.

“This is a participatory democracy,” he said. “You will be given a chance to speak.”

Following the Pledge of Allegiance to the flag, the chairman asked for those who wished to speak to come to the front of the room, identify themselves and offer comments.

“Ya’ll have a problem,” Bertie County Republican Party Chairman Garry Terry said. “Citizens are here to ask for an explanation as to the incredible increase in the county manager’s salary.”

Terry told the board they had the opportunity to show leadership and answer the questions of the citizens.

The next to speak was Kent Williams, who had addressed the salary issue previously, but spoke Monday about the possibility of building a new high school in Bertie County.

Williams recalled the building of Bertie Middle School and how the school had to be relocated because of wetlands at the original site.

“Our tax dollars spent $25,000 to clear the property and all of a sudden it stopped,” Williams said. “I’m under the impression you are talking about building a new high school.”

He said he thought the current facility could be repaired cheaper, but his main concern was the new site.

“If it was wetlands 10 years ago, it is wetlands today,” he closed.

Monica Lassiter was the next person to speak. She told the board members that citizens had put their trust in them.

“Search your souls before you make decisions,” Lassiter implored. “Every decision you make, put God first and then think if what you’re doing is something that is in the best interest of the citizens of Bertie County.

“If you’re holding a seat for yourself, we don’t need you,” she said. “Just like we voted you in, we’ll vote you out.”

The next speaker, John Davis, said he had received a copy of the contract between the Bertie County Commissioners and Lamb.

He said he didn’t know how other county employees felt since only Lamb and Assistant County Manager Morris Rascoe had received raises, but he knew how he would feel in their place.

Davis said county citizens would continue to ask for public information documents, including Lamb’s performance evaluation in the future.

He said he wanted the salary increase changed.

Tim Phelps then spoke to the board and said he had written a letter to the editor of the two local newspapers for the first time in his life.

“Any way you look at it, this is embarrassing to Bertie County,” he said. “We’ve had enough trouble the last few years.”

Phelps said he knew each member of the board and that he felt the public was “blind sided” every time they tried to get answers.

“I’m assuming tonight you’ll have an answer,” he said. “I hope it’s a good one.”

Terry Pratt said he had been a frequent visitor to commission meetings and that he sometimes knew what was happening and other times did not.

“This time I feel the county commissioners were out of line,” he said. “Mr. Lamb was irresponsible for accepting it. If he thinks he is worth that kind of money, I suggest he go find a job that pays it.”

Kathy Myers spoke to the county commissioners, also opposing the salary increase, but thanking Lamb for his work.

“I want to thank Mr. Lamb for his public service,” she said. “I had the opportunity to work with Zee to oppose the possible site of the Navy’s Outlying Landing Field in Bertie County to a successful conclusion.

“To the county commissioners, this was not your money to spend,” she continued. “It was our money. I’m disappointed in your lack of judgment.”

Charles Whitehead said he had been a resident of the county his entire life and that he knew each member of the county commission.

“On February 14, I wrote each of you a personal letter and expressed my concern and disappointment over a salary that is higher than the Governor of North Carolina,” he said. “Out of each of you I received the same thing we have tonight – nothing.”

Whitehead said there was a courtroom full of people asking them to correct their decision.

Also speaking at the meeting was Jim Myers, who did not address the board, but the crowd asking them to vote out commissioners and David Waters who talked about the uncomfortable position Lamb was in and suggested economic development alternatives.

The final person to speak in the public forum was John Lassiter, a retired member of the U.S. military who opposed the salary increase as well. He said his last station in the armed forces was in California.

“If I knew I was coming back to this, I would have stayed there,” he said.

He said the group of citizens that had gathered would “stay together as a team.”

After the meeting was adjourned, many of the citizens remained for an impromptu gathering about the situation.

Davis was the first to speak to the group and insisted that the group continue to work together.

“There are some who are trying to say this is a personal vendetta,” he said.

Ron Wesson also addressed the group, saying the answer from the board gave Lamb credit for everything that happened in the county.

Several other people expressed concern about a variety of items involving the commissioners and the Bertie County Board of Education.

Williams told the crowd they couldn’t “harp on one thing” and suggested the group continue to come to meetings and discuss items of concern at the public input sessions.

After approximately 25 minutes, the group dispersed.

Arrest made in Perdue stabbing

WINDSOR – The man being sought for a stabbing at Perdue last week has turned himself in. Bertie County Sheriff... read more