Back to the basics for family store 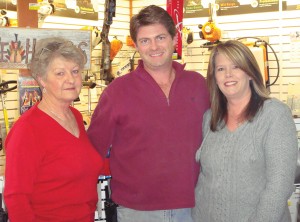 Brinkley’s Hardware of Gates remains loyal to its roots, which date back to 1979, as the current owners are, from left, Marian Brinkley, Vernon Brinkley and Jody Brinkley. The hardware store was founded by A.W. “Buddy” Brinkley, Marian’s husband, who passed away in 2000. Photo by Tara Kinard

GATES – Family owned and operated since 1979, Brinkley’s Hardware has been serving residents of the Gates County community, and beyond, for 32 years, and through three generations.

Located on Route 137, the current building was constructed in 1989, just a half mile from where the original Brinkley’s building (which was demolished following the family’s departure) was located. The property on which the current Brinkley’s Hardware sits had also been in the family for years.

“This used to be my dad’s hog pasture,” said Marian Brinkley, referencing the store’s current location.

It was A.W. (Abram Ward, or as he was more affectionately known, “Buddy”) Brinkley who first opened the hardware store.

“He always wanted to own his own store,” said Marian, “and had that experience from working in stores.”

“Buddy” was originally a meat cutter. At the time of his marriage to Marian he worked at Daily’s Grocery in Suffolk. After leaving Daily’s, “Buddy” held a few more jobs in the county, including Carrol’s Garage, where he worked as parts manager, and W.H. Goodman Hardware which he eventually bought out and changed to Brinkley’s.

“My husband really went into business, I just stuck with him, said Marian. “He passed away in 2000.”

Since that time, wife Marian and son Vernon have taken over operations of the business — Marian as president and her son as vice president. Vernon’s wife, Jody, also works at the store full-time.

Following the death of “Buddy” Brinkley, the two owners decided to incorporate.

“Now it’s officially A.W. Brinkley Incorporated,” said Marian. “It means you’re registered with the state as a corporation,” she said.

According to Marian, the decision to incorporate was mainly done in an effort to keep business and personal affairs separate.

“Anything done through the business does not directly affect me or him,” said Marian.

While much of Brinkley’s clientele are long-time customers, there are also a fair number of new faces bringing in their business.

“There have been a lot of newcomers,” said Marian. “Over the years, it has changed a lot because of the new housing developments, and after International Paper went out — many things have affected us in different ways — even death — but many people have moved here.”

One of the major blows taken by the business in recent years, as identified by both Marian and Vernon, as well as his wife Jody, has been the closing of the International Paper in Franklin.

“That was some of it,” noted Vernon, “but a lot of it is the traffic. Not having those three different shifts taking this route has really hurt us.”

Thus, as the traffic on NC 137 has slowed, so has business. Vernon also identified the recent decline in traditional building pratices, the introduction of manufactured homes, and of course, an increase in local competition as problematic for Brinkley’s.

Lowe’s Home Improvement in Suffolk has not proven to be a major headache for Brinkley’s. However, Tractor Supply in Franklin has made a visible impact on the local store.  And, though it may not need be specifically mentioned, the overall state of the country’s economy has had a devastating impact on businesses with Brinkley’s being no exception.

“Someone recently used the term zero to hero to describe us,” said Vernon, “and that was right on.”

The overall decline in business, coupled with the default of many in house accounts, has brought the Brinkley’s back to the basics.

“We strive to find ways to bring customers in,” said Vernon.

Plus, the winter season is always a slow time of the year for the store.

“People will be expecting the seeds and plants to be out here when it starts to warm-up,” said Marian.

Vernon also confirmed that it is a typical occurrence for business to dwindle during the winter months, then surge as spring arrives. However, he described this year as bringing a harsher decline in sales than usual.

The culmination of these factors have perhaps introduced Brinkley’s to the worst hardship the store has experienced in its history, but they’re not yet ready, or interested, in packing up.

“We will be here as long as we can afford to stay,” said Vernon.

There is one thing the store prides itself on that sets them apart from the crowd and has played a fundamental role in the store’s continuing success.

“Our customers get a lot of personal attention,” said Jody.

Remaining competitive is another focus point for the store.

“They (customers) quickly forget we can be cheaper on things,” said Vernon.

One of Jody’s major responsibilities is price shopping to ensure that Brinkley’s remains competitive.

“Sometimes people think that being independent means not being competitive,” said Vernon. “A guy was just in here and said, ‘Man you’re two dollars cheaper than Lowe’s was’.”

Vernon began working at the store when he was just 10-years-old — “back when 10-year-olds were allowed to work,” he noted.

He has been with the business all but three years following college. Vernon entered College of the Albemarle to pursue a degree in drafting and design. He completed his studies while taking courses at NC State and Elizabeth City State. While earning his degree he accepted a position as engineering manager at East Coast Aluminum in Winton where he stayed for approximately eight years.

Vernon left the aluminum plant and returned home when his father’s health began to decline.

“Dad’s health started failing and his intent was to get me back to the store—he was going to put up greenhouses, and I was going to run the store,” said Vernon.

“My husband liked growing his own plants,” said Marian who explained that after a series of bad weather, which blew the plastic off the greenhouses, they haven’t found anyone with the knowledge or interest to fix it.

Jody and Vernon currently sit on the Orgill (supplier) advisory council. Members are selected by their fellow peers in the industry. Now 41, at the age of 39 Vernon was nominated for the youngest retailer award. Though he did not win, it was nonetheless a proud moment for the man who is indeed the future of Brinkley’s Hardware.

JACKSON — The decision on re-naming one Davis Road in Northampton County has been delayed a little longer. On Monday,... read more