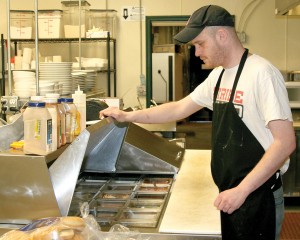 Chef Andrew Wynne prepares to whip up a dish at The Corner Tavern and Grill in Conway. Wynne, a 17-year veteran of the restaurant business, moved from Cary to Conway to take the chef’s position at the eatery.

CONWAY – If there is one thing Chef Andrew Wynne enjoys more than cooking up great food, it’s serving up smiles.

And if Wynne was looking for appreciation, he’s found it in the small Northampton County town of Conway at The Corner Tavern & Grill.

The Corner, owned by Katherine Ward and Will Mayle, officially opened in November, bringing Wynne from the city to the country and Conway its only eatery in town.

“The Corner is a restaurant in Cary and we branched out,” he said. “I was approached by my head chef in Cary, he asked me if I wanted to have my own kitchen, I said ‘sure’, and I ended up in Conway, North Carolina.”

The new restaurant has already become a hit with the locals as they pack the business during lunch and dinner times, and Wynne’s work has been part of the draw. The Corner offers customers a variety of dishes from chicken wings to salads to 12 ounce rib eye steaks.

Wynne, born in St. Louis, Mo., said his typical day starts out anywhere between 9 and 10 in the morning. He works on items on his prep sheet, a list of his daily tasks in the kitchen.

“That’s pretty much my whole day is prepping,” he said. “About 70 to 80 percent of our food here is made from scratch. So we put a lot of effort into making it come out the way it should.”

Wynne said the restaurant has very busy lunches which last from 11 a.m. to 2 p.m. From 2 to 5 p.m. he prepares for the dinner crowd. The chef has anywhere from one to two others or more assisting him in the kitchen during those rush times.

As the crowd gets busier at The Corner, Wynne feels the heat in the often fast paced working environment of the restaurant kitchen.

“I’ve been in the restaurant business for 17 years now,” he said. “I started off washing dishes and worked my way up.”

Wynne’s start in the business came while he was a young teen in Cary, somewhat by happenstance, at a Jewish delicatessen. A friend contacted him after an employee failed to show up for work and Wynne agreed to fill in.

“I went from washing dishes to actually slicing meats for customers in the deli,” he said. “(One day) they asked me to go help in the kitchen and cook scrambled eggs. I had no clue what I was doing, but fortunately after an hour or so I started to pick up on a little bit of what needed to be done.”

From the deli, Wynne began to broaden his food service skills in the variety of restaurants the Cary and Raleigh areas had to offer, motivating him to aspire to be a chef. Wynne’s training school was in the form the fine dining restaurants, country clubs and other eateries where he has been employed.

Wynne said those chefs were fundamental in showing him the “ropes” in the kitchen. He did attend school for a brief period of time, but Wynne soon realized hands on experience in the real world was a more beneficial way for him to learn.

“I was learning more from the chef I was working with than I was actually learning in school,” he said. “I was saving some money too.”

Wynne added he encourages people to stay in college for the opportunities an education can offer.

While Conway is a long way from Cary, the difference in atmosphere doesn’t seem to faze Wynne. He admits things move a little bit slower in a rural setting and his drive in from Roanoke Rapids (where he currently resides) is a little lengthy, but for the most part, Wynne said, “the move has been good.”

“It’s a little slower pace here than what I’m used to, but besides that everything has been going well,” he said. “Everyone seems to be happy with what we’ve done here.”

While the rural area may seem to be running on a different clock, Wynne noted the friendliness of the people and their support of the new restaurant venture. He said it’s a good feeling to be a part of something new and different in the town.

“That’s one of the things people say to me, they never thought anything like this would ever work in Conway, but granted we’re busy every night we have people come from Murfreesboro, people come from all over from around the area,” he said.

Most of recipes Wynne follows are from the original restaurant in Cary, but he occasionally branches out with the fare, mentioning a Buffalo chicken soup he made in the past. He said his favorite food to prepare is steak.

“I enjoy cooking steaks for people, that’s what I enjoy the most because I’m a big steak eater,” he said. “I enjoy cooking a good medium mid-rare steak and see a smile on their face.

As a chef, Wynne knows getting customers to return is vital to business.

“It’s one thing I do enjoy is putting a smile on someone’s face,” he said. “Walking across the street to the store and someone stops you and tells you that they ate there the other night and they enjoyed the food. That’s what really inspires me to do what I do.”

Back to the basics for family store

Brinkley’s Hardware of Gates remains loyal to its roots, which date back to 1979, as the current owners are, from... read more